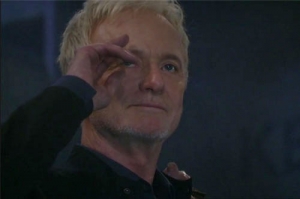 We saw Luke say goodbye to Port Charles this week. In spite of this historic loss, “General Hospital” was on fire, and several characters gave amazing performances. Let’s discuss!

Writers’ shake-up at the hospital.
News broke last week that current head writer Ron Carlivati is out, and Shelly Altman and Jean Passanante are in as co-head writers. Reactions from fans have been mixed. One change I would like to see with the new writers is the end of the long, drawn out stories. For example, the Fluke/Luke story went on far too long, and the same can be said of Jake/Jason’s identity. I would also like to see them stop with the dropping of stories for a few weeks, and then picking them back up. Brad and Lucas are a prime example of this. I really wanted to know what the deal with Brad’s marriage was, but as usual they’ve been dropped in favor of other stories, and who knows when we will see them again.

What do you think about the writers’ shake-up? Vote in our weekly General Hospital Poll: Are you excited about the new writers?

Luke says so long to Port Charles.
On Monday’s show we saw Luke say goodbye to Sonny and Lulu before walking off into the fog. I loved both of these goodbye scenes, but initially I was miffed that he didn’t have one with Laura as well. However as I thought about it, I really liked Laura’s explanation as to why they didn’t have one. It was because she had said goodbye to Luke long ago. As I said in last week’s Deconstructing GH, I’m really excited to see where they take Laura’s character on her own.

The secret continues.
On Friday’s show we got to see Laura standing strong and taking charge as she gave it to Liz for keeping the truth from Jake. Unfortunately she folded when Liz revealed her suspicions that Nikolas had Hayden shot to shut her up. At least they’ve given Laura a valid reason to keep quiet about what she knows, unlike Liz and Nik who are doing it for selfish reasons of their own. I for one am not buying those crocodile tears Liz shed when she claimed she too was keeping the secret to protect Nikolas.

Props to Michael!
I have really been impressed with Michael lately. There was a period where I couldn’t stand the character, as all he seemed to do was complain and lash out at everyone around him. However he’s really changing and growing up. I love that he seems to be the only one using his brains in regards to Jake’s identity, having connected the dots and suggesting Nikolas might know who Jake is if Hayden does. Why didn’t anyone else think of this?

Back to Shadybrook.
I loved seeing Franco become a hero and working to rescue Nina, who is back in Shadybrook. It seems fitting that the two revisit the place where they first acknowledged their feelings for one another. It was great seeing Franco tell Nina the truth about Silas taking Avery, though are we really supposed to believe that Nina simply stormed out of Shadybrook in a fit of anger and that nobody stopped her?

Even though I think that Ric is pure slime for what he’s done to Nina, I really hope he gets what he wants in the end. No, not Nina’s money, Liz! It was great seeing him end up alone back when he was scheming to break Liz and Jake up so he could end up with Liz. However given how Liz has been acting as of late, I think it’s fitting they end up with one another.

Silas finds his cojones a little too late.
Silas finally found his missing man parts and was fantastic this week. I adored him calling Morgan a selfish horny brat, and his facing off with the equally selfish Ava and telling her that he no longer cares for her was great. Everything he said to these two jerks was spot on. Unfortunately finding his guts cost him his life, as Silas was shockingly stabbed at the end of Friday's episode. Ava, Morgan, Franco and Nina are all people who would want him dead, and it seems that Nina was the one who did it. I'm not buying it, this has to be a case of "I found him like this and picked up the murder weapon because that's what TV characters do!" Frankly all four of them seem too obvious to be the killer. If Ric and Madeline were tipped off to the fact that Silas was going to confess, which would blow their own plans to smithereens, then they could be the real killer. If one of those two did it then that would be a good twist.

Remember, these are just my opinions. I encourage you to leave your own in the comments, even if you disagree with mine.