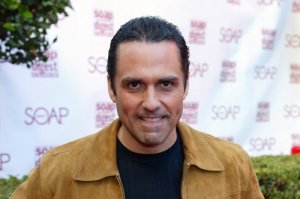 Soaps.com goes back to 1993 in this week’s Throwback Thursday poll when “General Hospital’s” Sonny Corinthos hired 17-year-old Karen Wexler to strip at his club…

Currently, Jordan Ashford is worried about Sonny’s bad influence over her young son TJ in Port Charles, and she wasn’t exactly reassured when Scotty commiserated over how the mobster treated his teenage daughter Karen Wexler back in 1993. Back then, the DA’s long-lost daughter came to town looking for love but got more than she bargained for from bad boy Sonny. The good girl began stripping at his club Paradise Lounge – and taking pills he supplied – when long-suppressed childhood memories of her mother’s boyfriend Ray Conway molesting her came back to the surface.

One night Karen was sick of the men leering at her and ran off stage, sending Sonny into a rage. He tried to bully her back into dancing by throwing her childhood trauma in her face and telling her how obvious it was that she loved showing off her body. Disgusted, she screamed that he was only using her just like Ray had, threw the pills in his face, and ran out.

Do you remember what name Karen stripped under?

Answer to the previous Throwback Thursday poll: Mikkos died when Luke threw him into his ice chamber.

Get more details about Lexi Ainsworth’s return as Sonny’s daughter Kristina-Corinthos Davis. And do you remember when Sonny’s wife Lily Rivera was killed by a car bomb?