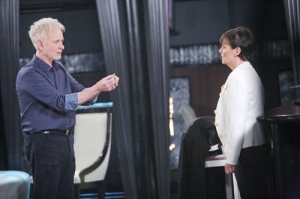 This week was the final full week for Anthony Geary, as Luke Spencer departs Port Charles next Monday. Let’s dish on Luke’s farewell, along with the other secrets and lies that are set to blow up the lives of those on “General Hospital.”

Countdown to Luke’s exit.
Luke’s goodbye scenes with Tracy were phenomenal. I loved everything she said to him about both of them needing to find themselves without the other. Between these scenes and those at their engagement party where Tracy let Luke have it for going off with Laura, Jane Elliott has earned herself a Daytime Emmy as far as I’m concerned. She’s been simply amazing.

It seemed fitting that Luke would decide his future at the old Spencer house, while also facing the ghosts of his past. I adore seeing Laura Wright (Carly) playing Luke’s mother, and I would love to see the young actress who played Patricia be given a present role on the show. She’s brilliant. It’s definitely going to be a different show without Luke Spencer on it. I am actually looking forward to what the future holds for both Tracy and Laura’s characters without Luke.

Dante’s secret will destroy everyone.
It was nice to see Dante admit he was not only wrong, but that he’s been no different than Sonny in trying to rationalize why he cheated. Meanwhile Lulu seems to be blaming herself for what happened as if she hadn’t lied to Dante then he never would have kissed Valerie. Oh how foolish she will feel for putting part of the blame on herself when the whole truth comes out. As if what Dante did wasn’t despicable enough, now he’s dragged Nathan and Maxie into it by confiding in Nathan. After a year of listening to Nathan lecture Maxie about honesty, he’s going to be the one with egg on his face when this comes out. I don’t think Maxie will be pleased with him at all. Dante’s secret is likely going to take down two relationships when all is said and done. I wish the writers could find a story for Nathan and Maxie that doesn’t involve tearing them apart.

Soon everyone in Port Charles will know about Jason, except Jason.
Every week it seems someone new in town learns that Jake is Jason. This week it was Laura, who threatened to reveal the truth, but like everyone else is keeping the secret. Are you kidding me? Half the town will know who he is before he does, and then he’ll probably want to move out because they are all rotten people for lying to him.

The mystery of the donated kidney.
In last week’s Deconstructing GH, I ranted a bit about the show’s habit of just dropping storylines or glossing over explanations. For example, when Tracy was attempting to explain everything about Luke’s final adventure to Sabrina she became frustrated and just said, "It’s all just too complicated to comprehend." That about sums things up some times. However to the show’s credit, they at least haven’t dropped the question of whose kidney Joss got. In the end though, I doubt it will be anyone of consequence.

Someone is still missing.
Speaking of dropped storylines, many viewers have been wondering as to where the heck Robin is. Given Nikolas dealt with Helena, who was holding her hostage, this is a good question. She’s the one who could blow the truth about Jake out of the water, so my guess is sooner or later she’ll have to surface. Would you like to see Robin return? Vote in our General Hospital Poll: Should Robin return?

Brad’s shocking secret.
Brad finally came clean with Lucas and told him that he couldn’t marry him because he’s already married. We don’t have all the answers yet, but this was a great twist. The show had focused so much on the secrets about his family and his adoptive parents that this was a nice surprise. Why doesn't he just get divorced though? I am thinking that Brad has an arranged marriage that absolutely has something to do with his family's mob ties, and that is what makes divorce tricky.

These are just my opinions. Feel free to leave your own, even if you disagree.