Deconstructing General Hospital: The secrets we keep from loved ones 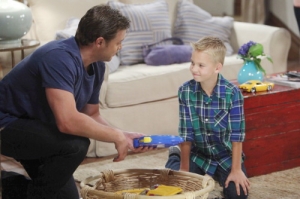 Fifth time is the charm.

This week seemed to be about reunions in Port Charles, and with those reunions came more secrets and lies. Let’s get to discussing “General Hospital.”

Reunited and it feels so good.
Jake’s reunion with Monica, who explained Jason’s history to him, was fabulous. I wish we would see more of Monica, and hope we will as Jake’s identity is inevitably revealed. Later, Jake and Liz were reunited with their son, little Jake, though in both cases Jake only thought these were first time meetings rather than reunions. I really hoped having her son returned to her might have been the thing Liz needed to push her into telling big Jake the truth, but no she’s selfishly still holding on to that. Watching her crash and burn over this will be delightful.

In last week’s Deconstructing GH I complained about how Luke’s final adventure has made no sense. Granted having Jake back is a nice trade off, but this week only continued the unanswered questions. Why did Helena take Jake? Oh just because, and we’ll leave it at that. Who died and gave their kidney to Joss? Oh just some random unknown child. These are the little things that annoy a lot of viewers.

Speaking of little Jake, how is it this kid is so calm and well adjusted after being taken away from his home for the last five years and just dropped into a new one with strange people? Do you think Helena has messed with his head in some way? Vote in our General Hospital Poll: Did Helena brainwash Jake?

Lucky was reunited with his brother Nikolas, who broke down and told him the truth about Jake/Jason. He did it so that Lucky would know Liz was in good hands, should he decide to leave town again and continue his soul searching, which Lucky did. What the heck? How is it that Nikolas, who is the new villain on the show, is the only one who keeps breaking and telling people about Jason? Meanwhile those who were his friends and family refuse to do so. This storyline is well past its due date. It’s time to reveal who Jake really is.

Luke and Tracy also shared a reunion, which came hot on the heels of a conjugal reunion between Tracy and Paul. Yeah, we all saw that one coming. Tracy put Luke in his place though and he really deserved it. Luke didn’t trust her. It’s the right thing to do to end Tracy and Luke, as Tracy deserves happiness and an on screen partner, what with Anthony Geary departing by the end of the month.

A proposal and a pastry.
Sonny’s method of proposing with a danish wasn’t that romantic in my opinion. Then again, I can’t believe they are actually going to give this another go. Michael’s reaction to the news was priceless. "Again?" Exactly! As if the fifth time is going to magically be different. I don't even think they’ll make it to the "I dos" before Carly does something to sabotage this. One would think Sonny would be the one to screw things up given he’s the criminal, but I am betting on Carly. I think she knows Avery is Morgan’s child with Ava and did a DNA switch somehow because she thought it was for the best that the child be Sonny’s.

Speaking of Morgan and Ava, oh brother! If these two are so insistent on getting it on, then find a private room somewhere! Don't do it where Kiki or anyone in general can walk in on you. Actually, maybe they should go do it on that bench in the park where everyone has top secret discussions, because nobody is ever caught there.

Is there a new player in town?
Someone hit Sonny's "alleged" organization, but the identity of those who robbed him is unknown. If not the Jeromes, then who? Could this be connected to Brad's secret that he's keeping about his adopted family from Lucas? We know his biological family was the old Asian syndicate the Wus, but we know nothing of his adopted family.

Everyone has a secret.
I really thought the storyline of Ric and Madeline gaslighting Nina was going to drive me mad, but I actually like it. It appears the writers are giving Nina a fresh secret about her past, as Ric mentioned how something traumatic must have happened to her as a child. That pushed Madeline’s buttons, who told him to drop it. I can’t wait to find out what the secret is. Kudos to the writers, as I and many viewers just assumed they were going to make Kiki her child with Silas that Madeline gave to Ava. Not that they still couldn’t do that...

As usual, these are just my opinions. Leave your own in the comments whether you agree or disagree.