Deconstructing GH: On the next episode of Cheaters 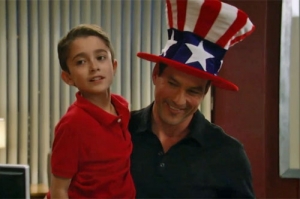 Stop, in the name of fatherly love.

The week got off to a slow start, but the closer we got to the Fourth of July, the more explosive things started to get. Let’s discuss what went down this week on “General Hospital.”

Back home, but for how long?
Michael returned AJ/Avery to Sonny in an attempt to make amends with his parents. He’s not ready to forgive Sonny, but it was a great first step. Michael is so much more likeable when he’s not screaming at everyone around him. I do hope the Quartermaines get ELQ back, but I don’t think Michael should return to being CEO. Lucy was right that he has some growing left to do. He needs to focus on being young and his relationship with Sabrina right now.

One person not happy about Avery’s return home is Denise/Ava. Oh boy! She needs to cool it with her persistence in seeing that baby otherwise she’ll blow her cover. I have a feeling Denise and that baby are going to disappear at some point, and it will destroy what little progress Michael and Sonny have made.

They grow up so fast.
The performance of the week has to go to Nicolas Bechtel (Spencer) for putting his father Nikolas in his place. I was so impressed with his speech about what he learned from the fire and his burns about being ugly on the inside, and it is obvious the visit from his ghost mom taught him something. Unfortunately it seems his father isn’t going to listen.

Port Charles math: 1 + 1 + 1 = 0.
Michael tells Jake that his speech on honor is exactly like something Jason would say. Jake remembers that Spinelli also thought he reminded him of Jason. Jake has had dreams that Danny is his child, and that he was in bed with Sam. Ehhhh! Let’s not connect the dots and just forget about it. This show is so frustrating at times.

Hide your kids, hide your exes.
With the return of Holly Sutton, Luke’s big adventure finally started to get good. We learned that Ethan had also been kidnapped, and the Luke and the Scooby gang traced them to a nearby warehouse. Now with all their combined adventuring experience, why did none of them think to tie the guards up after they knocked them out? The one came to twice to get the upper hand on them! If this were a horror movie then they’d all be dead.

By the end of the week Luke located and rescued Ethan from a bomb, and then everyone came face to face with the brains behind this operation. It was none other than Frank Smith, who we learned never really died. He has been paralyzed since Luke shot him in Puerto Rico all those years ago. We'll just ignore the fact that he waited this long to return and get his revenge. It does nicely tie in with Jennifer Smith's return last week. Still, the story hasn't exactly been the exciting adventure it has been made out to be. Hopefully the best is yet to come.

Forbidden fruits.
Morgan and Denise/Ava really just need to do it and get it over with. They are dragging out what we know is inevitably going to happen. I do feel bad for Kiki because when the whole truth comes out she has to deal with her mother lying to her about being dead and screwing around with Morgan. Which woman do you like Morgan with? Vote in Soaps.com’s General Hospital Poll: Who do you prefer Morgan with?

In last week’s Deconstructing GH I couldn’t figure out what Valerie's true intentions were. This week she showed that she does have a bit of honor and respect, as she tried to resist Dante while he flung himself at her. I don’t care what Dante thinks he knows, he’s throwing his marriage away without giving Lulu a chance to explain. I’m about to join team Dillu . . . Dilulu . . . Lullon? Yeah, their names just don’t mesh well.

Celebrating the Fourth in Port Charles.
Various couples gathered in the park and around town to watch the fireworks. The highlight was Nathan handcuffing himself to Maxie to remind her of how they spent last year. That was totally adorable, but then everything about Nathan is adorable. The real bomb was the one Denise dropped on Franco, finally admitting who she is. Say what? Franco hates Ava! What on earth is she thinking? I can't wait for his reaction next week.

As always these are just one person's opinions. Feel free to leave your own in the comments.