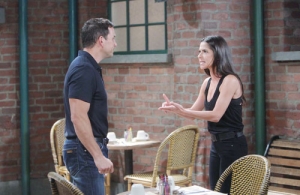 Port Charles’ Prince Nikolas Cassadine has been very good at keeping secrets from his friends and family. Nobody saw his takeover of ELQ until it was too late. That’s not the only secret he’s keeping though, and Sam and Jake are determined to uncover some dirt on him to force him to return ELQ. This week something about Nikolas starts to make Sam and Jake wonder about him.

Vote in Soaps.com’s “General Hospital” poll as to what you think Jake and Sam start to become suspicious about, and let us know in the comments if you are a fan of the new dark side of Prince Nikolas.

Find out who gets a surprising visitor next week by reading our General Hospital spoilers.

Deconstructing GH: On the next...