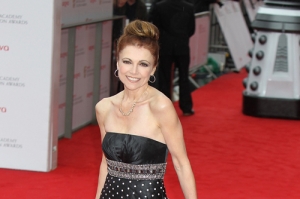 Soaps.com goes back to 1982 in this week’s Throwback Thursday poll, when “General Hospital’s” Luke first laid eyes on Holly…

Right now, Luke, Laura and Holly are holed up at a hotel waiting on the next move to save their children. Things were a little more lighthearted the first time Port Charles’ Luke Spencer saw Holly Sutton 33 years ago while camping. Luke was napping in a tree but was awoken by the sounds of some splashing. Following the noise, he found fair Holly swimming in the lake – sans clothes. He loved what he saw, applauded as he walked up, and commented about how nice the scenery was.

Luke wanted to join her but Holly was indignant, ordering him to turn his back while she got out, then demanding he hand over her clothes. When he turned around again so she could get dressed, she took the opportunity to disappear. Luke turned back around and found she was gone. Their separation wouldn’t last long – the two of them slept together that night!

After toying with her, Luke finally handed over Holly’s underthings which were hanging on by the dock. Do you remember what color they were? Vote in this week’s “GH” poll:

Learn more about what’s next for Anthony Geary after General Hospital in a new DVD.

Deconstructing GH: On the next...