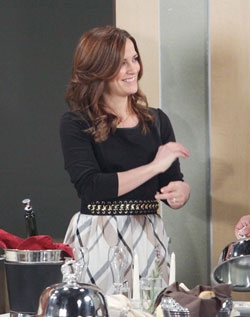 Out of her coma.

Rebecca Budig is now back in the studio taping, and is also on contract with “General Hospital.” Look for her character Hayden Barnes to wake up from her coma soon. Budig shared her excitement to be back on Twitter.

Finally! I can now say I'm so excited to be @GeneralHospital !! Thank you all for your support!

The cat was let out of the bag as several "GH" cast members celebrate a birthday today and began wishing one another well wishes. Budig, along with Perry Shen (Brad Cooper) and writer Jean Passante all celebrate their birth on June 26. Jean shared the following tweet bellow, suggesting that Hayden may soon emerge from her coma.

Thanks, Rebecca! It's so fabulous to write for you again! https://t.co/AoIKXupO6Q