General Hospital today and all week. Please contact ABC if you would like to see continued Jennifer Smith insanity! Haha

Holly Gagnier (ex-Ivy Jannings, “Days of our Lives” and ex-Cassie Reynolds, “One Life to Live”) has joined “General Hospital” as Jennifer Smith, the daughter of mobster Frank Smith (Mitchell Ryan). Gagnier’s first appearance was on Monday June 22 when Jennifer Smith demanded Luke sleep with her in exchange for returning Lucky.

Luke (Anthony Geary) was once engaged to marry Jennifer, though he was only using her to get access to her father’s businesses. Before the wedding, which took place on Frank’s yacht, Luke fell overboard and was presumed dead. He faked his death and together he and Laura (Genie Francis) worked to gather evidence to send Frank Smith to prison. Jennifer has held a grudge against Luke and Laura ever since.

Lisa Marie (“Mars Attack”) was the first actress to portray Jennifer in 1980. In 1994 Luke and Laura ran into Jennifer while in Atlantic City. The part was then played by Rosanne Barr (“Rosanne”) for three episodes. Both Francis and Geary also guest starred on Rosanne’s sitcom at the time. The last time Jennifer was seen was in 2002 when the character was played by Sally Struthers (“All in the Family.”) Jennifer kidnapped Luke and Laura and tried force Luke to marry her, threatening to kill Laura if he did not.

Gagnier posted to Facebook that she would be playing the role of Jennifer Smith for the week of June 22. Jennifer’s return figures into the storyline surrounding Anthony Geary’s leaving General Hospital. 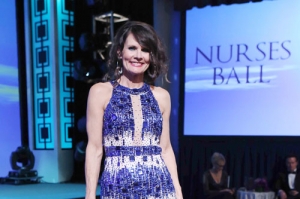 General Hospital Saturday Teaser Poll: Lucy has some explaining to do