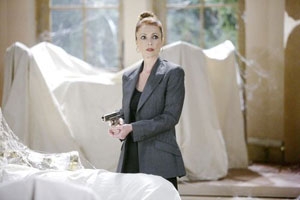 “General Hospital” alum Emma Samms is returning to the show as Holly Sutton. Samms has played the part of Holly Sutton off and on over the years since 1982. The character is the ex-wife of Robert Scorpio (Tristan Rogers) and was involved in a love triangle between Robert and Luke Spencer (Anthony Geary) which resulted in her son Ethan Lovett (Nathan Parsons). Holly Sutton was last seen on General Hospital in 2013 as part of the Polonium poisoning storyline involving Jerry Jacks (Sebastian Roche).

.@EmmaSamms1 is coming back to @GeneralHospital !! Very excited!! #GH

Finally Samms herself sent out the following Tweet and a first look at her back on set.

Hooray! I don't have to keep the secret anymore.. @valentinifrank @GeneralHospital pic.twitter.com/zUtOwKiUwP