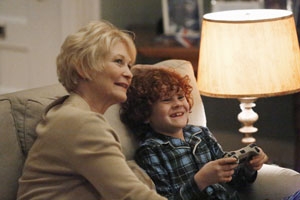 “General Hospital” alum Dee Wallace (Port Charles’ ex-Patricia Spencer) has a role in ABC’s Summer series “The Whisperers.” The show, which premieres tonight at 10:00 PM, is about an unknown invisible entity named Drill that only appears to and befriends children. Drill makes them do unspeakable things, and it’s up to the parents and the FBI to figure out who, or what, Drill is. The show stars Lily Rabe (“American Horror Story”), Milo Ventimiglia (“Heroes”) and Barry Sloane (“Revenge”). Wallace plays Willie Starling, the grandmother to Henry (Kyle Harrison Breitkopf).

Wallace joined General Hospital in April as Luke Spencer’s (Anthony Geary) older sister Patricia. The character, while only airing for a few episodes, was pivotal in revealing what happened in Luke’s past to fracture him and create his evil alter-ego.

Watch a promo for “The Whisperers” right here on Soaps.com.