The answer to last week’s Throwback Thursday Poll: Lily and Sonny were celebrating at Luke’s Club.

In this week’s Throwback Thursday Poll, Soaps.com goes back to 1993 on “General Hospital” when a familiar face arrived in Port Charles…

The people of Port Charles have been totally taken aback by the arrival of Denise Demouchio of Queens, a dead ringer for missing mobster Ava Jerome. But more than 20 years ago it was another doppelganger that had tongues in town wagging after Dr. Kevin Collins came to town. A psychiatrist, Kevin arrived to help his serial killer brother Ryan Chamberlain, who had been institutionalized for tormenting Felicia Jones.

Before they came face-to-face, Ryan insisted he had no siblings. But when Kevin entered the room Ryan had a very strong reaction, calling Kevin by name. Still, Ryan demanded his twin stay far away from him and charged at Kevin, screaming that they never had been brothers, and even had to be pulled off by hospital orderlies. After Ryan was gone, Kevin was sure they had achieved some kind of breakthrough.

Before Kevin arrived, Ryan told his doctor that he hated his mother. Do you remember the reasons he gave for his contempt? 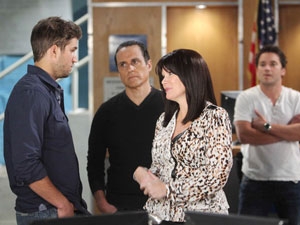