The runaways?
With Olivia’s baby out of danger medically speaking, he now faces the danger that comes with being Julian’s son. Ned seems to have a plan up his sleeve to protect Olivia and the baby. It seems like they are going to flee town to me, which would fit nicely with Lisa LoCicero’s (Olivia) maternity leave and Wally Kurth’s (Ned) exit from the show.

Carlos, your time has come.
Not only is Carlos suspected of killing Ava, which of course we know isn’t true, but now he’s gone and killed Duke, a major character. Viewers need a payoff and want to see justice for Duke. On Friday's live show we got just that, as Anna used Sabrina to find out where he was and then shot him dead! I wasn't expecting Anna to go rogue like that. It will be interesting to see how she gets out of this.

The evil trio.
In last week’s GH blog I admitted that even though what Liz did was wrong, I like her and Jake together. After her tantrum this week to Nikolas about having to hold onto Jake no matter what, well I’m rethinking my stance on them. In fact, I really cannot wait for Nikolas, Liz and Hayden’s lies about Jake to blow up in their faces. Hayden though is a fun bad girl and will likely come out the least hurt by this latest scam, as Nikolas and Liz are lying to people they’ve known for years. Hayden rightly pointed that out to them too. Bravo!

GH goes live!
I was really impressed by the quality of the first live show on Friday. I thought it would be more streamlined in terms of set changes, but it was no different than a regular show. The "live" puns got a little bit old though, and I was hoping for some bloopers. Overall, the cast did an amazing job.

Julian gave Jake up as the shooter to Sonny, which seemed to make no sense. Carlos has betrayed Julian time and time again, so why not give up the real killer? As it turned out, Julian had a plan to have Sonny and his men get caught by the police trying to snuff Jake out. I didn't think Julian had those kinds of smarts in him!

Little did Julian realize Jake wasn't alone at the garage, Sam was there. Jake confessed he didn't shoot Duke, but he went on and on about how natural it feels to hold a gun in his hand. As he was talking about how it seems he has all this killer training he was basically screaming to Sam, "Hey, here's some clues that I'm your not-so-dead-husband!" Before she could figure it out, as if she even would, Hayden arrived and was on the verge of telling the truth about Jake to them when the show ended.

Nina surprised Franco with a wedding dress and plans to get married, though she wouldn't reveal who she was marrying. By the end of the show her supposed groom showed up, shocking Franco. Who could it be? This storyline, the shooting of Carlos, and Hayden about to drop the bomb on Jake and Sam made for some great Friday cliffhangers. I can't wait for Monday's live show to see what happens.

Remember, these are just my opinions. If you agree or disagree, let me know by leaving a comment below. 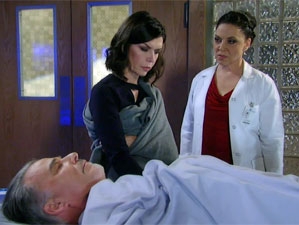 It was a somber week in Port Charles as an iconic character was gunned down. By the end of the week things were on the upswing as “General Hospital” went live on Friday for the first of two shows. Let’s discuss!

The death of a legend.
Watching Duke die was incredibly hard, as the character has been a part of the show for almost 30 years. Finola Hughes’ (Anna) scenes on the pier and in the morgue were fantastic. Her anger at Julian, and spinning out of control and almost killing Jake, were equally as amazing. I think she’s got her lead actress reels for next year with any one of these scenes.

There was something oh so wrong, yet oddly so right about having Obrecht in the OR comforting a grieving Anna. Well, she comforted her as much as Obrecht can comfort anyone. Giving these two a touching scene together, when they are usually at each other’s throats, was such a good choice on the writers’ parts.

Duke’s funeral was touching, and it was good to see characters like Mac and Felicia again, as we hardly see them anymore. It reminded me that we still never got closure to the ballot box snafu and Felicia being robbed of winning the mayoral election. Maybe them popping up is a sign that something will finally come of that.

Sonny’s dream about Duke’s fake-out felt like a knife in the heart. Viewers, myself included, were secretly hoping that Duke had somehow paid off Patrick or a nurse to give him a drug to make him simply appear dead. Or perhaps Anna and Duke conspired to fake-kill him in order to slip him out of the country and avoid Sloane persecuting him. However Sonny’s dream seemed to be a way of letting us know that wasn’t going to happen.

With Duke clearly dead for the time being, should Anna and Sloane give things a go? Vote in Soaps.com’s General Hospital Poll: Who should Anna be with?

Worst cops ever.
Poor Jake, he’s never going to outlive what Helena did to him and will forever be a suspect in any major crime that goes down in Port Charles. Of course Nathan finding him with the smoking gun in his hand didn’t help, but Detective West sure showed some shoddy detective work. Not only did Jake have to suggest a gunpowder residue check, which Nathan didn’t bother with, shouldn’t Metro Court’s parking garage have a surveillance system they could check? Or at least the hotel itself to see the timing of when Duke left and when Jake showed up? It’s no wonder the mob has survived this long in town, the keystone cops can’t do anything right. 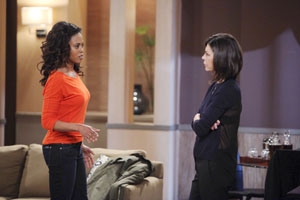