The Britch is back!
Britt made a surprising, and very welcomed return to Port Charles this week to share in the fun that is the Nurses’ Ball with her bestie Brad. These two are always so much fun. Britt's reunion with Spencer was just as glorious. They have as much chemistry as Nikolas and Spencer do, and their scenes are always great. Her return is bittersweet though as Nikolas turned her away for her schemes, and now he’s the biggest schemer in town. A bad boy like Nikolas needs a proper bad girl, and Britt would be the perfect fit for him.

Loose lips sink ships, and so do big mouths.
It’s become normal on soaps for people to discuss their secrets in public and nobody ever overhears them, which generally annoys viewers to no end. Anna and Jordan are the worst offenders. Therefore it was a pleasant surprise to have Sam actually overhear Olivia’s secret. Then again, Olivia has a booming voice, so she should have known better to shout it out in the hallways of the hospital the way she did.

Poor Ric, even Molly sees it!
Ric is such a slime ball that one can’t help but root for him to get his comeuppance. At the same time, he’s so pathetic that you kind of feel sorry for him. Even his own daughter Molly can see he was setting himself up for a fall as Liz isn’t over Jake. Liz also would likely run back to Nikolas or Lucky if the opportunities arose, so seeing Ric lose Liz isn’t that much of a way to stick it to him. In fact, it might be doing him a favor.

An explosive and exposing Nurses' Ball
Friday saw the beginning of the ball, with Maxie falling on her face on the red carpet after seeing Nathan arrive with Ellie, and Dr. O crashing the opening with an amazing rendition of "99 Red Balloons." As Spencer remarked while watching on TV, it was fabulous!

Carly headed into the ball with the proof that Hayden wasn't Jake's wife, and she exposed it and Ric in a big way, right on stage during his proposal to Liz! So far this year's ball is off to an excellent start. Seeing Ric and Hayden crash and burn was amazing, but not as good as Nikolas finally blurting out the truth about Jake to Liz. I did not see that one coming and at all. How will he explain keeping this from everyone? He's been pretty quick on his feet with excuses, but this one will be tough. Also with Hayden unable to blackmail him over this, which is pretty much the only gravy train she has left, what will become of her? So many questions! It would be interesting to see Liz get a little evil again and agree to keep Nik's secret in order to be with Jake/Jason and keep him from Sam.

Between Jake's secret getting blown out of the water, and what Sam knows about Olivia, this is going to be one explosive ball. Normally it's just Lucy's underwear that gets exposed at this event. She may eventually have to strip down on purpose this year to keep the ball on track. So far Brad saved her from that by proposing to Lucas, which was very sweet, but Lucas has yet to answer. Monday can't come soon enough. Until then, let us know what you look forward to most from the Nurses' Ball each year. Vote in Soaps.com's General Hospital Poll: What's your favorite part of the Nurses' Ball?

Spencer to Nikolas on his business associate Hayden, "What kind of business would that be father, the kissing kind?"

Lulu to her brother, "Nikolas you live! I was beginning to believe you had fallen and couldn’t get up."

Nina after catching Franco going through her purse, "AJ! AJ where are you? How did you get out of my purse?"

Spencer to Joss, "I hate to break it to you, but that townie might have a point, you are a bit of a nudge!"

That's it for this week. Remember that these are just my opinions and we encourage you to share yours as well in the comments. Also be sure to check out all of Soaps.com's red carpet Daytime Emmy coverage, including Sean Butler reveals something big happening at the Nurses' Ball this year. 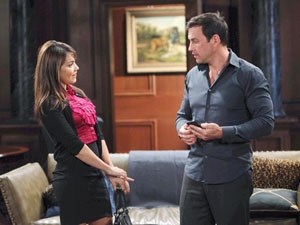 Credit: Reunited and it feels so good. (ABC)

ABC already has a show called “Secrets and Lies,” but that about sums up this week in Port Charles as everyone’s were coming out. It should definitely make for an interesting Nurses’ Ball. Let’s discuss this week’s “General Hospital” episodes.

Nikolas, the ladies man!
Nikolas sure has his hands full lately, what with Lulu’s creepy cousin Valerie staying at his house, having to pretend date Rosalie after Lulu caught them conspiring, and Hayden dropping in for her sex visits. Juggling all these women actually may be his undoing, not his secrets about Jason or attempting to take over ELQ. It was great seeing Rosalie back though, and hopefully we will see more of her. She is fantastic in every scene she’s in, and we still need to know her secret. Nikolas being caught with Hayden by Spencer was also great, as was Nikolas trying to assure Spencer that his face would be okay. The scenes between Nikolas and Spencer are always amazing and often touching. You can really see how much he cares for the kid.

Let’s make a deal, Avery style.
Avery is back, and predictably Kiki and Morgan looked like the biggest culprits in her kidnapping. They definitely deserved what they got due to their dunderhead scheme drugging Michael, but Michael coming out on top yet again was a crummy pay-off. I ranted about Michael being the golden boy in last week’s GH Blog, and he continued to shine this week too. Michael once again schemed to get Avery back in his arms. It was unbelievable how he couldn’t understand why Morgan seems to hate him, especially after Sonny and Carly took Michael’s side in all of this and gave him what he wanted, regardless of what he’s done to them! Now Sonny is not innocent, and neither is Carly, but so far Michael is just getting everything he wants, including his parent’s support no matter what he does. Carly and Sonny are going to push Morgan off the deep-end really soon. They better watch out when he blows.

Dr. O. knows?
It seems Obrecht has a lot of secrets she’s been keeping, perhaps more than the viewers even realized. We know she knows who Nathan’s dad is obviously, and she has something on Nina that even Nina doesn’t know about, but now it seems she may know who Jake is. When she ranted to Sam about Jake, she all but spelled out who he really was. She pointed out how insane it was that Carly, Liz and Sam fluttered around him like lovesick butterflies when they don’t know him from Adam. Does Dr. O. know? It wouldn’t be shocking if Faison confided in her as to who Jake is. She definitely seems to have hated him from the start for no good reason. Maybe it’s because she’s always known he was Jason.