Find out how to cast your vote for the 42nd Annual Daytime Emmy Awards Fan Favorites before the live broadcast. And there is still time to vote in Soaps.com’s Ninth Annual Sudzies.

Right now Carly is searching for baby Avery, but it was another baby she was trying to hold onto back in 1998. Port Charles’ Edward Quartermaine and his grandson AJ were talking about how to continue in their plan to get baby Michael from Carly when Justus Ward let himself into the mansion despite their protests and informed them that Carly was no longer sane enough to stand trial for shooting Tony Jones. “She’s wigged out,” he said. He let them know that Carly was being transferred to a psychiatric hospital for the criminally insane, and Jason Morgan was furious about it. The Quartermaines acted like they didn’t know anything about what made Carly snap, but Justus warned them Jason was holding them accountable. Really, Carly was only pretending to be crazy because Tony told her she was not getting out of Shadybrook as expected and was being remanded for trial.

While the three of them discussed Carly’s mental state and Jason’s anger, Alan got up from the couch where he had silently been sitting and unsteadily slipped out of the room. He was on his way to meet someone he had called just moments before everyone else arrived. Do you remember who? Vote in our “General Hospital” poll: 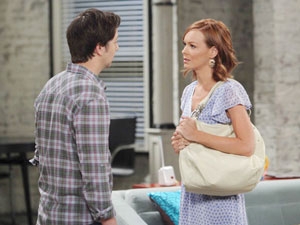