Has Stuart Damon been Fired? 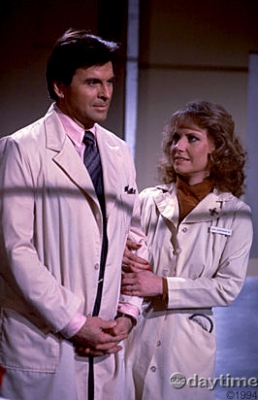 Soaps.com woke up this morning to a SCOOP. Unofficial scoop, but still, it’s scoop! Sadly, if turns out to be true it’s not good news for those of us who have been enjoying Dr. Alan Quartermaine through all of his zany and troubled life. Sources tell Soaps.com that ABC has fired Stuart Damon. Newer fans of General Hospital might think it’s not a big deal to lose this character, but think again! Alan has been a part of the show’s key family since 1977. His life has had a big impact on some of our front-burner characters of today. He and Monica (and their torrid affairs and reconciliations!) were front-burner storylines for most of the 70’s and 80’s. One time, Alan tried to kill Monica and her lover, Rick Webber, when he learned that “his” son A.J. might have been fathered by Rick. As it turned out, Rick wasn’t the father. Alan went on to have a love affair with a lovely waitress named Susan Moore. She is Jason’s mother! After Susan died, Monica took Alan back and adopted Jason as her own. Years later, Alan and Monica adopted Emily after her mother died of cancer. In more recent years, Stuart Damon did an amazing job portraying Alan’s fall from the upper class in to the gutter as a pain killer addict.

In case you need a reminder of the multi-branched Quartermaine family tree, here it is. Edward and Lila (God bless her sweet soul) are his parents. Tracy, as you probably know, is his sister. Alan also has learned that he has two half siblings from his father’s various affairs, Bradley Ward and Jimmy Lee Holt (both have died). Busy Alan has married Monica twice and Lucy Coe once. Some fans would say that Susan Moore ties (Monica) for the love of his life. In addition to A.J., Jason and Emily, Alan considers Skye as his daughter because when she came to Port Charles in 2004, she was thought to be his daughter from yet another affair. It was only after the family came to love and accept her did they learn otherwise. Alan is the proud, yet somewhat estranged, grandfather of Michael Corinthos (A.J.’s biological son) and Skye’s new baby, Lila Rae. His sister Tracy has given him two nephews, Ned and Dillon and Ned’s daughter Brook Lynn is his great niece. There were also a couple of Ward children (Justice and Faith) hanging around the Quartermaine parlor for a few years as well!

If Soap.com's sources are correct, we'll see this treasured character leave Port Charles in some way soon! Could he have been Rick Webber's real killer? Will he go back on the pills? Will he catch one of the many stray mob bullets that fly around town? If you don't want to see him go, you can do your best to affect change. Give the "Powers that Be" your valuable opinion. Here is the contact information:

GH and all ABC Daytime e-mail address: netaudr@abc.com or daytime@abc.com

Stuart Damon is a very talented singer and actor. Does anyone remember him as Prince Charming on "Cinderella"? How about when he performed at the GH Nurse's Ball every year? After being nominated for the Daytime Emmy for Outstanding Supporting Actor in '82, '83, '84, '91, and '96 he finally won in 1997! He lives with his Deirdre, his wife of twenty-five years, in Los Angeles's lovely Hancock Park area. They have two grown children and a grandson. Stuart is an avid golfer and has stated that he hopes to direct plays and create "at least one unforgettable screen role" in the future. We hope he can stay on in Port Charles � and even spend more time on that highly coveted front burner! If you want to show your support and write him directly, here you go:

Keep checking our Soaps.com newsroom; we'll let you know as soon as we hear any more on this story. And keep your fingers crossed that we get to enjoy Alan Quartermaine for many years to come.

Robert Scorpio and The Women...

Dare we dream that Laura will be...