Famous last words.
Just as many fans see Michael as the true hero, many also feel he has a right to be angry. I don’t disagree, Sonny killed his father and both of his parents lied to him about it. However Julian calling him an ungrateful spoiled brat was the epic moment of the week for me. It was long overdue that someone told him so. Unfortunately Sonny’s pardon and all the praise he’s getting has spurned Michael to vow revenge on Sonny. Somehow whatever Michael’s planning is likely going to just blow up in his face and hurt the wrong person.

Loser of the week.
First she lost her mother, and then Sonny swooped in and took her sister from her. Kiki was definitely the loser of the week, but I honestly felt really sorry for her. How much more pain can they heap on this poor girl? I'm eager to see how Hayley Erin stepping in to take over the role might change the direction of Kiki's character.

Flu baby.
Olivia kept dropping the fact that she was battling the flu left and right. Given that Lisa LoCicero (Olivia) is pregnant in real life, it was pretty obvious where this story was going. Surprise, Olivia is pregnant! I actually really enjoyed the chemistry between Olivia and Julian on New Year's Eve, and was shocked by how well they worked together. However in last week’s GH rant I discussed how boring Ned and Alexis are. As much fun as Julian and Olivia were, this Julivia baby might force even more of the eternal snooze fest that is Ned and Alexis on us viewers. The news came at the worst possible time too as Ned and Alexis finally seemed to realize who they should be with.

Suddenly I see.
Liz finally opened her eyes and saw what a slime ball Ric is. It was about time. I’ve been missing her and Jake’s friendship that Ric has been bleep-blocking for weeks now. Hopefully Liz will not give Ric another look.

Is this real life?
Franco’s LSD induced trip into James Franco’s life was good for a laugh. However the comedy shtick is getting a bit old. I want to see more dramatic, emotional and real scenes between Franco and Nina. These two are fire together and the show needs to use them more.

Unhappy Valentine's Day.
The much touted Valentine's Day episode featuring the stars of "Baby Daddy" and "Cristela" was a major bust. The bulk of the episode was bland dialogue simply recapping what's been happening between the various couples on the show. Derek Theler's run-in with Brad in the locker room was a nice bit of eye candy, but it was far too brief. The one highlight of the show was Julian's heartfelt advice to Lucas about relationships, and Lucas' proclamation of love for Brad. The one nurse who thought Lucas meant Bradley Cooper was a riot.

Ric to Scott, "I’m sure all the lap dancers at the lizard lounge will still be there for you, Scott." Scott, "Yeah but all the good ones will be taken."

Maxie, "That's the thing about Nathan, what he lacks in body fat he makes up for in integrity." 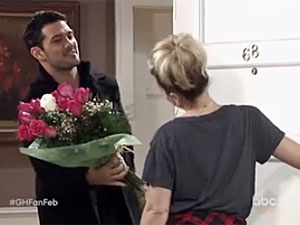 Credit: Who's your daddy? (ABC)

This week seemed to have a lot of dialogue meant to be review for fans who haven’t been watching frequently. We still have little answers on what is going on with Luke, Nikolas’ motives are just as puzzling, and Port Charles celebrated Valentine’s Day. Let’s discuss what happened on “General Hospital.”

Oops she did it again.
Maxie really is her own worst enemy. She’s one of my favorite characters on the show, but I just want to shake some sense into her. She is a mother now, so she needs to start putting her child before what she wants or what her friends need. After all she went through with Judge Walters, how could she help Johnny? Not only did she jeopardize her custody arrangement, but she’s also potentially screwed things up with Detective Sexy Pants. I am bracing myself for what mistakes she’ll make next with Spinelli back in town and springing the news on her that Ellie dumped him.

The brainteaser that is Luke’s mental problems.
Viewers learned that Luke has always been Luke, and whatever is wrong with him has been going on for far longer than we realized. As he doesn’t appear to be taking orders from Helena, it’s doubtful he’s under her mind control. His personality switches seem to point towards a split personality disorder. I get the feeling that whatever happened at the Spencer house, the missing sister Patricia, and Bill Eckert all somehow tie into something that happened to Luke long ago that fractured his mind.

Let’s make a deal.
Thanks to Nikolas, Helena went free in exchange for admitting what she knew about Jake and Luke. Hopefully this will be enough to get Jake out of the mess he’s in, but it’s doubtful she will shed any real light on Luke’s situation. Nikolas’ motives in all of this are still unknown. He clearly despises his grandmother and wants to see her punished, but he put the greater good of his friends’ needs over his hatred for her. On the other hand, he’s clearly resorting to illegal measures to help himself by rigging the election, which hurt his friends Anna and Felicia. What’s his end game? Where is this all going? Nikolas is impossible to figure out right now, but hopefully the show will give us some insight soon.

We can be heroes, for just one day.
Fans are currently debating who the real hero on The Haunted Star was, Michael or Sonny. Obviously the point of Sonny getting the credit was to get him out of prison, but many are furious that Michael’s actions have gone unnoticed by most in town. Both were heroes in my opinion, but Michael’s constant temper tantrums simply make it hard to feel anything for him. What is your opinion? Vote in Soaps.com’s General Hospital Poll: Who was the real hero on The Haunted Star?