The house on Elm Street.
If Fluke actually is a brainwashed Luke, this leaves us to wonder what is actually in the basement of the Spencer house. Not only does Fluke want to keep people out of that house, but Helena also panicked when she learned Michael was snooping around it. We still don’t know where Robin is. Perhaps she is in the basement. Or perhaps Stavros and Victor aren’t as dead as we thought and they are in cryogenic chambers down there. Several times this week it was mentioned that the house was located on Elm Street. I’m starting to think Fluke is Freddy Krueger and this entire storyline has been a nightmare that Tracy is having.

The case of the missing phoenix.
Helena’s plan to have Jake kill Sam was thwarted by Jake’s memories and the sort of return of Robin. Robin was actually his subconscious talking him out of his job. Jake had memory flashes and stole Sam's phoenix figurine, which he subsequently lost after passing out on the pier. Hilariously that figure sat on the docks as Sam, Jordan, Duke, Shawn and countless others walked by it without finding it. Eventually Lucas found it, but what are the chances it went unseen for that long. Come on! The one good thing about the missing phoenix is that Sam now has a new obsession to fill her time instead of just focusing on Jake.

Hey, what’s in your bag?
For weeks Sam has been telling anyone who will listen that Jake is the man who took her hostage. So why hasn’t anyone bothered to stop and ask Jake what’s in the duffel bag he constantly carries around with him? It really does look suspicious. Luckily for Jake neither the cops nor the paramedics who tended to him on the docks bothered to open his bag. Instead they just transported it with him to General Hospital for Carly to find and snoop through. Faced with the evidence in the bag, even Jake realized he could be guilty. Jake needs to get his memory back and fast as this storyline is getting a little stale. Of course he also needs to sleep with either Carly or Liz before he remembers he’s married to Sam, a twist we can all see coming.

Mother knows best.
As one of the fans who actually enjoy Patrick and Sam as a couple I was happy that they finally made love. It was beginning to look like Sam would never get down to business given how much time she spends focusing on Jake. However the moment was ruined thanks to Alexis wanting to high five her daughter over sleeping with Patrick. Ew! That was just wrong and creepy. At least Alexis did point out Sam's obsessions to her, not that Sam will listen. She's determined to find her phoenix.

Wanted: one gravedigger and one terrible undercover agent.
Sonny ordering Shawn to dig up Bill Eckert’s grave has been one of the most sensible things suggested since everyone in town has been talking about Eckert for weeks. Super spy extraordinaire Jordan is onto Shawn though, and got caught spying on him at the graveyard. After weeks of being terrible at her job, Shawn called her out on being a cop. Finally someone figured it out. Jordan however must have taken her smart pills, as she was able to lie her way out of it. Enough talking and more digging. We fans want answers as to who Fluke is.

The crazy train returns.
Friday saw the return of characters we haven't seen in awhile. Franco was finally let out of solitary confinement and found Sonny and Julian conspiring to break out of prison. The only thing better than Julian and Sonny teaming up could be Franco joining them. I'm going to need some popcorn for this. Over at Miscavige, Nina and Heather have become besties. The show dug itself a hole by making Nina a psychopath right out of the gate. How do you get the fans to root for such a character? By making her the target of an even bigger psycho? Upon learning that Nina is the apple of Franco's eye, Heather found her next victim. Run Nina, run!

Fluke, upon seeing Tracy calling, "Oh, Tracy, I better get back to the house before she implodes."
Helena: "Sounds good to me!"

Fluke to Helena, "Good luck with the double murder, I hope everyone is dead!"

Franco to Sonny and Julian, "While I was wrongfully imprisoned in prison, what you two have become close? That's sweet. What is going on here? Are you Sonny's new prison wife? Does he like to call you Carly?"

Heather to Nina, "In case you haven't noticed there's a lot of crazy people in here!" 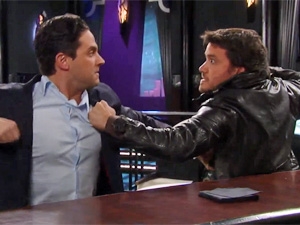 This week it seemed like many in Port Charles did what most of us dream of doing, spending half to most of the week in bed. More clues to Fluke were dropped, and things in Pentonville got heated. Let’s get into all that happened on “General Hospital.”

Here’s Johnny.
Johnny’s return, and buying back his half of The Haunted Star, got both Dante and Nathan fired up in the jealousy department. Dante basically ordered Lulu to sell her half of the restaurant, which was not a good move on his part. Dante better cool it before he pushes Lulu back into Johnny’s arms. Meanwhile Nathan was concerned about Maxie’s former relationship with Johnny. Fortunately he did not go all crazy like Dante did. The show did give the viewers a cute and clever play on real life versus reel life with Maxie and Johnny’s scenes. The actors are married in real life and share a daughter named Harper, which is the name Johnny had picked out for his little girl should he have one.

It’s time to get up.
While most viewers likely don’t have an issue with the smorgasbord of shirtless scenes Nathan has been given lately, watching him and Maxie lying around in bed has gotten old. These two need to get up, get dressed and do something else besides each other.

Fishing on the docks.
Even though Helena told Nikolas that Luke was her partner-in-crime, he didn’t really believe it until he saw it with his own eyes. Nikolas’ questioning of Fluke’s motives seemed to be more than just curiosity. It seemed as if he was fishing for info. It definitely looks like Nikolas is playing his grandmother and maybe trying to bring her down. At this point my money is on Nikolas figuring out the truth about Fluke before anyone else in town does.

Cousins, identical cousins.
In last week’s GH Rundown Blog I speculated that perhaps Fluke was actually his missing sister Patricia, who was constantly being brought up. This week though the show shifted back to discussing Bill Eckert every chance it got. Eckert is the obvious choice, so he should be the last choice the show would go with. “No Spring Chicken” from our forums suggested that Fluke was actually a brainwashed Luke. When Helena told Fluke that soldier boy’s name was Jake it seemed to hit him hard. Fluke is also constantly bothered by the mention of Eckert’s name. I can’t recall if we’ve ever seen anyone else in the room when the two Lukes have been on screen together. Could real Luke be all in Fluke’s head? It’s definitely a plausible theory, and one that solves the issue as to how Tracy could be fooled by an imposter Luke in the bedroom. What do you think? Vote in Soaps.com’s General Hospital Poll: Who is Fluke? 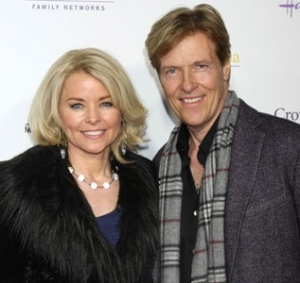