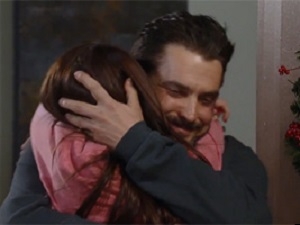 Obrecht will crunch your bones! (ABC)

Surprises, miracles and heartbreak were all given out to the residents of Port Charles this week. Krampus came to town, and fortunately for the kids of “General Hospital” so did Santa Claus. Let’s discuss the week that was.

You are not the father!
The DNA tests came in this week and poor Morgan is not the father of Ava’s baby. I felt so bad for Morgan. The only good thing to come from the heartbreak was a Morgan and Kiki kiss. These two are so good together, though I don’t know if they can overcome their complicated history. For now they’ve sadly agreed to put the child first and backburner anything that might be going on between them. Here is hoping New Year’s will change that.

Rescuing Ric
In last week’s General Hospital Rundown Weekly Blog I had said that if Jordan was Ric’s only salvation, he was probably a dead man. Fortunately Shawn stepped in and together they managed to save Ric from Carlos, but now it seems Jordan’s cover is actually blown. It will be interesting how she manages to save herself, though honestly Julian should be grateful to her. Had Carlos actually killed Ric then Julexis would forever be dead in the water.

Ric versus Jake and Sam?
Ric’s reunion with Molly was one of several touching moments of the week, as was his reunion with Elizabeth. Jake on the other hand didn’t seem too thrilled by Ric’s return, and Ric clearly saw that Elizabeth was starting to move on. Ric and Sam aren’t the best of buds, but it could prove interesting if the two of them teamed up to try and take down Jake. Here is hoping Jake’s false identity doesn’t end up lasting as long as Fluke’s has though.

Stand by your man, or don’t.
Carly’s attempt to explain to Jake how it was a good thing that Sonny was the baby’s father was the “what the hell” moment of the week. I cannot believe she thinks this is a good thing at all. Sonny is not exactly the father of the year, nor does it appear he will be around in this child’s life for any part of the foreseeable future. Sure we all know Sonny won’t stay in jail long, but for now that is where he is stuck. Carly and Sonny definitely have their fans, but they also have those who don’t want to see them go down this road again. I am on the latter team. Tell us what you think Carly should do by voting in Soaps.com’s General Hospital Poll: Carly should?

Maxie’s miracle.
We finally learned why Judge Walters had it out for Maxie this week and how Nathan managed to be her silent hero. As was obvious, Nathan went to his “Mutter” for help. The scenes with Nathan and Obrecht actually were touching and sweet, but this week was all about Maxie's reunion with Georgie. It was pretty humorous that a blackmailed Monica withheld nookie from Walters in order to get him to reverse his ruling, but what it all came down to was the judge didn’t want to see Maxie make the same mistakes his deceased daughter did. The judge actually wasn’t a bad guy in the end, but he did abuse his power and crossed the line. I’m still not a fan of his. Kudos to the writers though for the Connect Four game between Nathan and Maxie, including having Maxie pull out the old line from the commercial, “Pretty sneaky sis.”

Merry Krampus.
While all the heartwarming and touching family reunions were nice, for me the moment of the week went to Obrecht’s storming “GH” dressed as Krampus. I adored her costume and the story she told the children. I was shocked that Spencer didn’t like the story, as he is a little devil. I was not at all surprised that Joss found it thoroughly entertaining though. I don’t think it would be that bad of a thing if Krampus did come to Port Charles and steal a few characters away never to be seen again, but I won’t name names.

Here we go again!
Not only did “GH” not give the viewers Fluke’s identity as a Christmas gift, but they stuck us with a reteamed Julian and Fluke. How can Julian be so stupid as to get mixed up with this psycho again? Here is hoping the New Year will actually bring us Fluke’s identity, as this storyline needs to go out with 2014 and stay there.

Ringing in 2015.
It doesn't seem 2015 is going to start off well for several Port Charles residents. Maxie and Nathan's bad luck continues as it looks like they will be ringing in 2015 from different sides of the country. Poor Jordan still has to remain undercover in order to stay alive, only now it seems she'll be working for Anna to bring down Duke and Sonny. TJ will likely have to wait until 2016 to learn the truth about his mom at this point. Then again, Friday's cliffhanger found Jordan at the end of Julian's gun. She has to find a way to make it alive to 2015 first. Elizabeth finds herself torn between Jake and Ric and has no idea which man she wants, though it seems she wants Jake. Finally half of the town is either in prison or a mental hospital, neither a fun place to start the New Year off. Hey, for most of Port Charles things can only get better in 2015, right?

Kiki to Morgan, “I know you love your dad and I love my mom, but they are screwed up and that is putting it nicely.”

Julian to Fluke, "When was the last time you lifted a finger to do anything other than pour yourself a drink?"