How did you guys feel about Liz and Nik's ever so brief pairing? I rather liked it. I couldn't help but to remember a time years ago when a great male friend and I suddenly looked at each other in a new light and dated for a while. It was really great to find chemistry with a man that I already loved so much as a friend. Granted, it didn't last long but still, it was a refreshing way to meander into a relationship. But I digress! Rebecca annoys me on an increasing basis. Watching her chug a beer and sprawl out on her bed next to Lucky grossed me out, in fact.

I was touched by Luke's vulnerability at the airport with Ethan. Equally moving, I thought, was Ethan's stubborn refusal to let himself be hurt in the process of DNA testing. It was our first glimpse of a softer side of the cad that most fans have been quick to dislike. I look forward to this week and the fallout of the paternity testing. 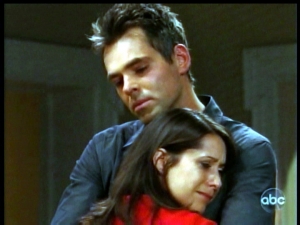 A reader last week called me on something that I’d like to rectify right off the bat. I’ve been quick to criticize Robin for her actions during this PPD storyline but have failed to commend Kimberly McCullough for her abilities to bring this troubling storyline to life. Perhaps it’s her talent as an actor that makes this storyline so easy to criticize. If she wasn’t doing so well, I wouldn’t have been so annoyed with Robin. Similarly, Jason Thompson has so convincingly portrayed Patrick’s frustration (and ultimately, anger) that I’ve wanted to reach through my TV screen and ring Robin’s neck for denying what her actions were doing to that family she so desperately wanted. I thought the intervention came in the nick of time – the tension in the room was palpable. Finally, I think that storyline will turn around and produce as much of a happy ending as a soap will allow.

What puzzles me is why Carly suddenly took off for some clinic in South Carolina. Wouldn’t you think that Jax would have at least accompanied her given his worry over her condition? To me such storyline cracks scream ‘vacation’! Hopefully Laura Wright is off on a beach somewhere gearing up for the waterworks that will likely come with Michael’s surgery this month.

I find myself wanting to see Claudia slowly fall in love with the idea of becoming a mother. We’ve often seen men soften once a little bundle of joy is placed in their trembling hands (remember Patrick?), but I can’t think of a case in which a non-maternal woman has caved to the irresistible pressure of a wee one. And, of course, we know that Sonny would totally get into starting a new life from scratch and would thrive in his role as a father again. Could the forth time be a charm for him? (Fifth if you count Dante.) 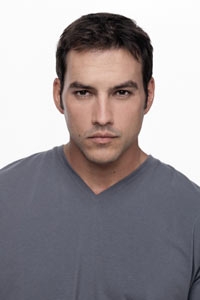 General Hospital Promo Clip for Week of May 4