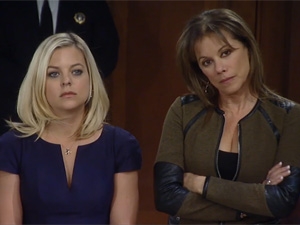 This week in Port Charles saw the surprising resurfacing of characters, the jailing of yet more residents, and a lot of pre-holiday heartbreak. Most of these characters should likely get coal from Santa this year, but hopefully some of them will get the happiness that they are wishing for. Let’s discuss the week that was.

Heartbreak for Maxie.
It was another setback for Maxie, as Judge Walters denied her visitation rights again for failing to stay away from Nathan. How creepy is it that Walters seems to have spies watching Maxie’s every move? Does he have nothing better to do? Nathan made the comment that the judge seems to have zeroed in on Maxie and I think he may be right. But who would want to stick it to Maxie like this? Poster “lovesdogs980” noted in our daily recaps that it’s not like Spinelli, an out of work hacker for the mob, is any more fit than Maxie at this point. Are Spinelli and his girlfriend Ellie somehow behind this, or is the judge just a mean and nasty man? Nathan seems to determine to play hero and made a call to someone to try and get things moving for Maxie. Something tells me he’s getting help from “mutter.”

More heartbreak.
This week wasn’t a great one for the ladies of Port Charles. Olivia ended up getting shot down by Ned after finally telling him how she felt. What was Ned thinking? Actually, he wasn’t thinking. He must really be hung up on Alexis to pick her over Olivia. He’s going to feel like a fool when she inevitable dumps him to go back to Julian. I almost hope Olivia doesn’t give him a second chance if that happens. I was glad to see Olivia stand her ground and tell Ned that they couldn’t even be friends as it was too hard for her. Here is hoping Santa brings Ned some common sense and he ends it with Alexis first. Olivia was definitely the star of the week and she shined in her scenes with Ned and her little jabs at Alexis while waiting on them at Metro Court.

From one frying pan to another.
Julian just got himself out from under Fluke’s thumb, or at least so he thinks, and now he’s landed in bed with Johnny Zacchara. Really Julian? Maybe he needs to stick to his word to Alexis and just get out of the mob all together, as he doesn’t seem to be very good at it. He at least showed some smarts when he told Carlos he wasn’t about to get too involved with Johnny. It seems Julian has a plan to double-cross Johnny and get his hands on Sonny’s territory, but it obviously won’t be that easy.

Trapped in a trunk.
In last’s week’s General Hospital Rundown Weekly Blog Violette DeSantis pondered where in the world Ric was. This week we learned Johnny has his him and delivered him via a car trunk to Julian. Anna talked Jordan into remaining undercover to try and find Ric. I don’t know who to feel worse for, Jordan or Ric. Poor Jordan is never going to get to tell TJ the truth about her job, yet at the same time she is so bad at it that poor Ric may really be doomed if Jordan is his only hope. Here is hoping Shawn can save the day and rescue Ric as Sonny asked him to. One improvement this week was that Anna had the smarts to bring Jordan into the station in cuffs to have their latest secret meeting. Apparently she finally realized the public park wasn’t very good for keeping Jordan’s cover, which miraculously still hasn’t been blown.

Who else is hiding on spoon island?
Nikolas needs to fire his entire security staff and have a new surveillance system installed at Wyndemere because everyone seems to be hiding out there. It was bad enough that Anna supposedly imprisoned Faison right under his nose, but now Helena is hiding out in hidden passages in the house. This is the Cassadine that Helena wants to rule their family? Maybe she should take a cue from the British monarchy and skip Prince Nikolas and go straight for Spencer. Spencer is a little scene-stealer, and his scenes with his great grandma Helena are amazing. Here is hoping the show serves up more of those two together.

Too many triangles.
Sam finally figured out that Jake is the gunman who took her hostage, but nobody seems to believe her and the evidence isn’t there. Sam and Elizabeth had an epic face-off over Jake, with Liz taking Jake’s side. Once again it’s hard to figure out who I should feel sorrier for, though in this case I think the clear winner is Jake. Sam is going to be devastated yet at the same time overjoyed when she finally realizes the man she’s decided to make her focal point for revenge over Jason’s death is in fact Jason. Meanwhile Elizabeth just seems to be so unlucky in love that I can’t help but feel bad for her as well. Ric’s eminent return will likely complicate her love life even more. I oddly find myself favoring Elizabeth and Jake over Jason and Sam though, especially since Sam and Patrick are so good together. Tell us who you think Sam belongs with. Take Soaps.com's General Hospital Poll: Who does Sam belong with?

Fractured memories, fractured brains.
Jake has begun to have memories of taking Sam hostage and sought Patrick’s help this week. This is the second time that Patrick has made mention that Jake’s brain scans show previous brain surgeries. Isn’t there some kind of database the hospital can search through to try and find a clue to his identity? It’s not like we are talking about having your tonsils removed, brain surgery is major and his case may be very unique. Then again soaps aren’t known for their logic. It also seems that Jake doesn’t want to remember his former life thanks to Patrick suggesting he may very likely have been a criminal. It was at least nice to see Kevin Collins get a shout out from Patrick, who suggested Jake go see him.

You are not the father!
Baby Jamie Corinthos is undergoing a DNA test to finally settle who the daddy is. The discussion about the problems genetically and legally was fairly humorous, given you can buy DNA tests in stores now and they could do this without Silas’ help. Here is hoping that baby is Morgan’s, as Sonny doesn’t need another kid to mess up. Speaking of his messed up kids, Michael continued to be unlikable this week, tossing Kiki and Morgan out of the brownstone. He needs to go track down Rosalie to get some good loving so he’s not a total Grinch this Christmas. As for Rosalie, where is she and will we ever learn that secret of hers?

Prison block lovers.
Nina and Franco’s future went from bleak to possibly bright, as Alexis swooped in to represent them both. Hey if Julian can get out of prison, so can these two. Their scenes together were amazing and we actually saw a side of Nina we’ve not seen before, broken and defeated. If only these two had realized sooner that they could be happy together then maybe they wouldn’t be in this mess to begin with.

Olivia to Alexis, "I don’t know what made me think you were easy."

Ava to Silas, "Carly’s a hateful b****, but she raised three kids right. Certainly better than that wife of yours, she’s positively certifiable."