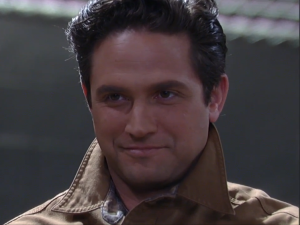 The mojo of the show might not be the same, but there is still some mojo in the storylines. Sad farewells played out well and tense moments surrounding gains and losses in a couple of love stories moved us. Now if the PCPD could just stop losing criminals and babies maybe they’d have time for the next great romance.

Here’s Johnny.
Well Johnny’s Pentonville presence packs a punch as Sonny soon found out. While Fluke considers how much Michael and Sonny are cut from the same cloth, it is apparent that Johnny is his father’s son too, but just a little less crazy than Anthony. The bits in Pentonville continued to give the week’s episodes a feel of mini-tales that stood out entirely on their own. Sonny’s ordeal in Pentonville, facing his former rival and performing the selfless act of telling Carly to move on, was moving.

What about Bob?
Never mind Bob, unless he has any authority that transcends his authority over Jordan he’s not likely to do anything about Commissioner Anna Devane overstepping her reach. The addition of these acquaintances from Anna’s past questioning her actions and nothing ever being done about it is a major flaw. Fans wonder why she hasn’t been charged with anything or why she’s even commissioner still. It might be fun if Scott had some authority and could get a court order to make her step down during an investigation. Maybe Fluke could take over in her place and we could have another run at a truly corrupt police force like Port Charles did decades ago. Now that Sonny’s in Pentonville, Fluke is the only game in town unless Duke has something up his sleeve to derail the pending crime takeover. Personally I’m not tired of the Fluke storyline, especially since it is making some headway, and like a few stated in the Soaps.com forums, it is great to have Helena back.

Where in the world is Ric?
Speaking of crazy reveals…No sooner was Alexis told that Ric was alive and before she could tell Molly, she learned Ric was missing. Here’s to hoping he mysteriously reappears in a fun way sometime in the future that will give the storyline more meaning. I have a good feeling after Friday’s episode that there is more to this mob story than meets they eye after Johnny told Sonny, “Soon enough you’ll be listening to reasoning, same as the Jeromes.” Have the Zaccharas been involved in this the whole time? With Fluke 2.0 in place, Ric missing and Carlos on the loose hinting it is time for he and Julian to get to work, it is a sure bet that the mob storyline is far from over.

Ambiance.
The scenery of the past few weeks wasn’t the only thing adding to the show. Music was noticeable in the story shorts that played out this week. There was intensity throughout the Pentonville scenes and enjoyable holiday fare edited appropriately for some fun and quirky stand still moments at Delia’s during the reunion with her granddaughter and on-the-run daughter. Betsy Franco’s return added to the sincerity of the situation of Morgan trying to find his alleged daughter.

Hell of a run.
And so it was. Carly and Sonny did have one hell of a run and it's probably not over. It will be interesting to see what plot twist gets Sonny out of this predicament…a second shooter perhaps? Whatever it is, the time is now to get these two back together after fans have had a taste again. Many want to see more consistent couples. We have Lulu and Dante but everyone else seems to be waiting in the wings.

Those bungling PCPD cops!
The debacle that was the Sam kidnapping and Faison escape was by far the biggest farce of late. It might bring Jason closer to discovery or closer to being disclosed as someone's soldier boy but it only added to the annoyance of Anna serving as commissioner. It was even more annoying since Faison's comments in interrogation made it seem as though she would be the catalyst in some way for a successful escape. Fluke aptly said it well to Helena, "This particular police department, it must be said, is not exactly formidable." Oh, and by the way, does the PCPD own any tear gas? It might serve well to catch someone that they have no chance of apprehending otherwise. At least they were able to time travel off to Canada, make friends with the Canadian Mounties, and apprehend three criminals in record time.

We are family.
Dante wasn't bungling when he made his way to Canada dragging Port Charles into what one could only call, this week's episode of "our bitchin' little family." 'Real GH Fan' started a thread that appropriately represents the feel of the show lately titled "Port Charles? Sounds like Pine Llanview re-mix." I agree it's different, but don't mind admitting I care for the stories and characters that have run off in their own direction but it would be nice to have a clue for the mysteries that run amuck until there is a big crazy reveal. So, the sentiment is not missed and the point of all is taken – there's always room for improvement or better timing.

Soldier boy.
Hard to tell if this is entertaining yet or not. Helena using mind control is not new, but the nuances of having someone new play a Jason who doesn't remember that he is Jason and who doesn't remember at Helena's command everything she tells him to forget can become a major annoyance. There's just too much to take in and it treads on being as much a miss as Nina's existence was in Port Charles. Jake at least gave a hint of having Jason's listening ears for his friends and it was a nice touch to have him applying for a job working for Carly at the Metro Court.

Bon voyage.
So much for the touching reunion discussed in last week's "GH" Rundown blog between Obrecht and Faison at Wyndemere. This week the reunion was cut short between the two of them and it turned into even more of a heart wrenching scene when on top of Obrecht deciding to stay for Nathan, there was a heartfelt goodbye to her Britta. Also, let's not forget the goodbye between her and Spencer. Britt's leaving made me sad and curious as she made promises to Spencer that her leaving wasn't permanent. Could there be a future storyline in the wings involving Britta, Spencer and Helena? Tell us what you think about Spencer reuniting with Helena. Take Soaps.com's General Hospital Poll: Spencer's future as a Cassadine holds?

Also, there were a lot of questions left unanswered after the few clues we were left with this week. Please respond with your thoughts in the comments below as we try to hash out what is going on in Port Charles.

Lulu to Maxie, "Why is Nathan in Pentonville? Did he get arrested?" Maxie, "For what?" Lulu, "Slaying the ladies with that body of his."

Spencer to Helena, "Father said I'd know you by the snakes in your hair." Helena, "They only come out for naughty little boys who don't mind their manners."

Delia to Kiki with Morgan, "Well at least you're back up on the horse…and a mighty good-looking one at that."