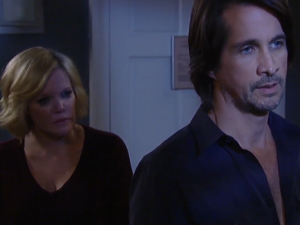 Suffering from repetitive soaps disorder? Then you came to the wrong place because the cycle in Port Charles is stuck on repeat. The big picture doesn’t seem to have a point anymore but we’re showing up for the visceral vignettes.

Thanksgiving.
Lies, lies, and more lies. On Spoon Island, the only thing to be thankful for was Obrecht and Faison’s reunion which was better played out than Nik’s tongue lashing of poor Britt. He picked a bad time to play daddy. It was hard to blame a little boy for his anger over losing a potential mom. Really harsh of Nik but Britt let the opportunities to come clean earlier slip away. It was nice to see her cry on her bestie’s shoulder. Brad’s appearance reminds us that this soap is centered on a hospital that no one ever works at anymore. The Quartermaine feast was waylaid by Fluke 2.0’s arrival. Definitely nothing to be thankful for there as the viewers heaved a collective groan of, “Not again!” Discovery that Faison was not the only Luke in town perturbed many.

Ava.
Oh cry us a river already. That woman is the great manipulator. How ironic that she calls Franco a seriously evil man. Seriously? Let’s get serious. Ava’s picture is next to the word evil in the dictionary…even though she would rather be pictured next to the word mobster. All childhood dreams can’t come true. She’s doing better than Silas. His face is pasted next to the word fool.

Not your baby, Crazy Pants.
Jamie, a.k.a. Dimples, appears to be putting a kink in things for Franco. Despite subtle pleas to turn the baby over to a firehouse, Nina’s sticking to her plan. She’s really thinking for someone who was on the brink of insanity a day or so ago.

Pentonville.
I always like a new set in Port Charles and Pentonville’s playground didn’t disappoint. It was a nice take on Sonny out of his comfort zone too. Maurice Benard is perfect for this part and Brandon Barash as Johnny Zacchara is a welcomed return. Michael Q’s construction site wasn’t amounting to much but his visit from Sabrina was the silver lining for his struggles over losing both fathers. Hopefully he’ll take heed of her words of warning about revenge. His dilemma adds depth to his character but many love the ‘good guy’ Michael.

That's enough of whatever that is.
Dante couldn't have said it any better after cutting off Faison at the PCPD. Let's move it right along. I don't know that we want to lose Anders Hove, but this storyline has overstayed its welcome despite how much we've appreciated the great acting in a lot of scenes. Who knows? Maybe it is all a dream. Jane Elliot, Tracy, and Finola Hughes, Anna, were great this week. It's too bad Tracy was duped again and Anna lost her Duke and possibly her sanity with the return of Faison. She was waxing pathetically about pretty much nothing except what Faison did to her family, especially Robin. It might not supersede what is happening to Tracy. Anna, who really seemed to want to shoot someone, might have to hand over a gun to Tracy when she finds out that the returning Luke is Fluke 2.0. She'll have a better chance of getting off than Anna might. Everyone around Anna has a look conveying just how much they think she is the monster that Faison is accusing her of. Apparently Dante will arrest his father the mob boss before he will arrest his boss the criminally insane police commissioner. If viewers are lucky, maybe Scott Baldwin will put the whole PCPD on trial because that is where it belongs.

Lucy and Duke.
Anna and Duke are no more so it might be a great time for Lucy to get in on the action. What's another mobster in her life? In Port Charles you can never have more than one. Like diamonds, they're a girl's best friend. Luckily Sabrina will be sporting one on her arm now that Carlos is out of the joint.

Marvelous adventure.
Surely Port Charlesians are living on a different planet. Liesl's dreaming of family dinners and people are being manipulated by mind control. Maybe they should rename the show PC Comics because of it's comedically insane over-the-top stories. We've got a real good picture of all the villainous players, Ashton, Faison, Jerry Jacks, Helena, Fluke/Luke look-alike, now we need to get to the meat of the story and what a brain-washed Jason and newly-kidnapped Sam have to do with it.

And you get a mask.
In last week's "GH" Rundown blog I suggested it was possible that everyone but Julian had a mask. This week it came to pass, well maybe just someone who looks like Luke…exactly like Luke anyways, is getting closer to what they want. Let us know what you think this person's real agenda is? Take Soaps.com's General Hospital Poll: Fluke is out for?

Britt to Liesl, "He's an international terrorist, kidnapper, all around criminal." Liesl, "You say that as though it's a bad thing."

Liesl to Britt, "I feel like a pilgrim embarking on a great new world." Britt, "Bon voyage."

Spencer, "If someone doesn't carve up that bird it's going to come back to life and gobble up on out of here! Where's my hat?"