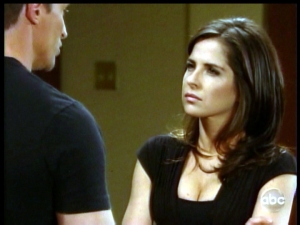 TMZ is reporting that Merrill Wetter, the man who burglarized Kelly Monaco in April, has been sentenced to 12 to 30 months in prison. He will also have to pay Kelly $5,000 in restitution, a $25 court fee and a $150 DNA fee.

It is being reported that the man accused of breaking into Kelly Monaco’s (Sam, GH) Planet Hollywood penthouse in Las Vegas is having his day in court right now after being caught on surveillance footage from the actress’ floor and was recognized from a previous incident at the hotel.

The man had been a guest of Planet Hollywood’s between March and April for thirty days, but was kicked out after he was caught following a money cart in the casino. The night of the incident, he was seen on the security tapes getting into a cab outside of Planet Hollywood and was apprehended after cops uncovered his destination from the cab drivers who drove him around town, ultimately landing at the Venetian Hotel.

The accused assailant has been charged with burglary, invasion of the home and grand larceny.

Last Thursday night Kelly Monaco (Sam McCall) woke during the night to the sounds of someone trashing her living room in her Las Vegas apartment. She reportedly took cover in her room until the intruder left. We’re happy to note that thankfully, she was unharmed. Since then, she has enlisted the help of a security team and the burglar has been arrested.

Kelly is currently splitting her time between Los Angeles and Las Vegas where she is doing a live show at Planet Hollylwood. In addition to Kelly, “Peepshow” stars Mel B (Scary Spice).

Soaps.com and her fans alike wish Kelly all the best during this time.