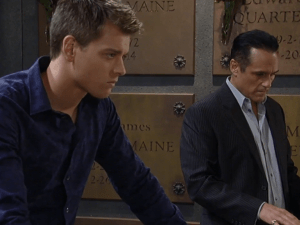 This week might have had a few low points but the rest was just to die for. It was replete with too many funny quotes to mention, newly invented Halloween traditions to further a storyline and scheming women plotting out revenge…oh and Franco too. Did you laugh, smile, and cry?

Oh, for Heaven’s sake.
The addition of Beggar’s Night raised eyebrows even in Port Charles as they tried to make light of the fact that someone planned a wedding on Halloween that screwed up Josslyn’s plans. Mostly it was just to hook up Spencer and Josslyn so they could put their heads together and get him invited to her mom’s wedding. The whole plot point wasn’t as ridiculous as how little time it took for Patrick and Sam to make it to Spoon Island with Cam and Emma. That place is literally a hop, skip and jump from the launch.

For shame!
Shameful slights took place this week as Sonny continued to withhold the truth from Michael, along with Morgan, Kiki, and Carly. Madeline took the cake though when she convinced Sam and Silas that Danny’s cancer returned. Perhaps it would be nicer to believe that Madeline’s intent for helping was to bring Sam and Silas back together. Shame on Ava for being a mobster without a gun and bigger shame on Shawn and Jordan for being duped by Heather and Franco. Oh man, that was good. Yes, shame on them, but what entertainment it all was.

Give me a break.
Give us all a break. Did Faux Luke appear on the Quartermaine patio? If you know Larry Ashton’s past history with Tracy, it doesn’t seem at all far-fetched that the man shanghaied in burlap could be the man who was parading around as Luke. Here’s to another timeout. It just better not be months until the story wraps up. Even more tiring was not being privy to whatever Jordan continued to bait Shawn with.

It's about time.
That Sonny's met his match. It's uncertain if he can beat Franco at his own game. Franco and Heather were just a powerhouse of crazy. Throw Nina into the mix and that trio becomes its own natural disaster. Roger Howarth was brilliant even though it was sometimes easy to picture James Franco taking on the role again that he made iconic. The sadness of pending doom hung in the air, perfect for Halloween, but not so much for a wedding. The fall of Carly and Franco, even if they weren't meant to be, was sad and Franco grappled with his demons as Scott and Kiki spoke touching words to him before the wedding. It was no sadder than the impending doom that was expected to befall Sonny and Michael.

Am I invisible?
Nina may question if she's invisible, but one thing's for sure, she's not quiet. How on earth she and Madeline thought they could hold private meetings in Dr. Obrecht's office was a mystery. Unfortunately I'm having my moments when I wish Nina was invisible. As much as the thought of another baby story turns some viewers off, I'm still interested in how it will change things for Nina.

It's showtime.
And what a show it was. The week ended jam-packed with drama. The trilogy of terror for Halloween was Nina all touchy feely over Ava's baby, the truth about Ava coming out, and of course the wedding. Carly looked too lovely for the disaster that was to be her...oh, who's keeping count...walk down the aisle. Well, lovely except for that hideous evil eye necklace. Maxie's losing her touch as a wedding planner to allow that. It's too bad poor Lucy Coe doesn't get to keep the dresses from the Nurses' Ball because her wearing the same gold-green dress again was a true terror. Maybe it's her officiating dress. Who's fooling who, it was no trilogy, the whole Halloween episode was a house of horrors. Liesl had a time keeping her own sister's evilness in check. Even she might have found what Madeline did to Sam horrific. Felix reading from Shakespeare's 116th Sonnet was a creepy but nice touch to Friday's montage of impending doom.

Not letting go.
In last week's "GH" Rundown blog Sabrina came clean to Michael about how Carlos didn't shoot AJ. This week was intent on leading up to a possible reveal with Franco trying to destroy Sonny. Let us know what you think the fallout may be for Michael and the Corinthos family? Take Soaps.com's General Hospital Poll: Michael will?

Heather to Shawn, "I could kiss you but I'm saving myself for Luke Spencer or Scotty Baldwin. I'm just like Laura, no offense."

Franco to Scott about Logan, "How'd he die?" Scott, "He was stabbed to death by Lulu Falconeri." Franco, "Now I don't feel so bad about strapping her to a bomb."

Franco to Heather's therapist, "Who the hell else would want to take Heather?"

Heather to Shawn, "That's not a very nice way to talk to the lady with the gun."

Heather to self, "You know what they say. When God closes a door he opens a window, except when there isn't one."