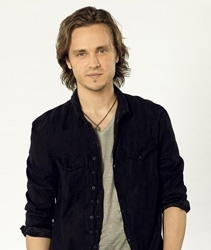 “General Hospital’s” Jonathan Jackson (Port Charles ex-Lucky Spencer) and his band Enation have released a video for their first single “Everything is Possible.” The single is included on the band’s fourth album, Radio Cinematic, which was released on October 14 by Loud & Proud Records. The album is available on Amazon, iTunes and Google Play.

Jonathan Jackson + Enation is composed of Jackson on vocals and lead guitar, his brother Richard Lee Jackson on drums, and long time friend Daniel Sweatt on the bass guitar. You can watch their new video right here on Soaps.com. You can also vote for the video over at MTV as the newcomer video that makes it on air. Jackson can also be seen every Wednesday at 10:00 PM ET/PT as Avery Barkley on ABC’s “Nashville.”

Read about an upcoming General Hospital fan event in Florida.

General Hospital Actors On The Chew