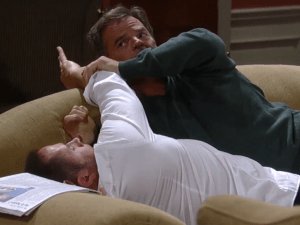 The childish, a bit of the mundane and more mystery furthered plots along this week. Despite leaving out the most anticipated reveal so far, things could be worse.

For shame!
Julian messing with Ned. Childish – totally not the polished Julian Jerome of this decade. Of late however the show has turned into the battle of the bad couples. Between Ned, Julian, Alexis and Olivia and Sonny, Carly and Franco, nothing is working. Well, maybe Brad and Lucas are despite Bobbie’s interference. She was batting a thousand in trying to get her son a job at the hospital as a doctor. Oh, sure, Brad can put in a good word with Dr. O.

It’s about time.
Premonition time that is. Olivia needed to keep up the good work to keep Sonny on top if his A game. It was exciting that Franco thought enough to include Heather in the demise of her favorite person, ‘Snarly’. He had an agenda and wanting Heather at the wedding was a nice surprise, but not as nice as Carly’s surprise of finding out she was to be wed on the Haunted Star. Isn’t it every girl’s dream to have her betrothed plan her wedding? It really was hard to tell which one to feel sorry for…Carly for the weird turn of events by Franco, or Heather for what might happen to her after Sonny’s done with her. She did look absolutely radiant at the news that she would play a part in Franco’s wedding plans. Franco on the other hand was looking a tad bit like the old Franco. Eerily creepy.

Who am I?
Stone Chatty was asking a lot of questions. It’s a wonderful thing for Jason really. His possible recognition of Franco’s name indicates hope that Jason will snap to and remember who he is before the fall of Carly on her wedding day. Everybody seemed to recognize Jason in some way in him but then not at all. It may be a short wait, but it feels as long as waiting to find out who Julian is working for. If viewers can’t have both stories completed at the same time, having Jason break free of his amnesia would be a welcomed event.

Together Again.
Two highlights before closing out the week were Carly thinking she knew ‘Jake’ and Sonny talking to Connie in the Quartermaine crypt. Carly’s look of recognition was a heart stopper and it was hard to accept that she didn’t complete the connection. Connie trying to balance out Sonny’s flaws again were heartfelt and it will be sad if he doesn’t make what he did right somehow instead of giving Ava and Franco all of the power.

Healing the grieving.
Nurse Santiago and her compassionate honesty with Michael definitely broke open the great mystery of what might have happened to AJ. Too bad Michael will be headed to a darker place when he finds out what happened. This better not be all for naught. The closure won't come until all is revealed about Ava's lying, murderous ways.

Bundle of madness.
In last week's "GH" Rundown blog we toyed with the idea that Nina could get help for her mental illness. This week that didn't seem to be a likely scenario. Nina's ready to get Madeline to help her get Ava's baby. Baby snatching is not on my viewing wish list. Enough already with the baby-napping storylines. On the flip side as less annoying were her and Franco connecting on so many crazy levels, literally. It was a hoot that Madeline decided she didn't like him.

The great Jerry Jacks frame-up.
I wasn't surprised that Julian looked confused when Alexis announced Jerry Jacks was the great mob kingpin. Viewers can only endure so much. There is so much we want to know, well, at least for those who still care about this storyline. Tracy seeking help for her soul mate was touching and she couldn't have duped a more willing participant than Alice to try and help Luke. The longing for ELQ shares gives an air of mystery that tends to make one think perhaps that the Cassadines are surely involved due to Edward's involvement in the search for the Ice Princess. How personal is it? Take Soaps.com's General Hospital Poll: Julian's boss is?

Carly must have gotten a new wardrobe to go with her necklace. Everything seemed to work surprisingly well with that offensive thing hanging around her neck. Maybe it was mesmerizing us to watch. Be careful, it might lose its powers after Luke's revealed.

Heather to Franco, "Carly and Sonny made a sex tape?" Franco, "Unwittingly." Heather, "I can't imagine anything more vile." Franco, "You can't."

Heather to Franco, "You are the best son in the world…even though you tried to kill me."

Brad to Lucas, "She threw me off a parapet and I still work for her."

Sonny to Dante, "I'm going to make him an offer he can't refuse."

Alexis to Julian and Ned at the Quartermaines, "Would one of you kindly explain why this place has turned into the Thunderdome. It's not even Thanksgiving."