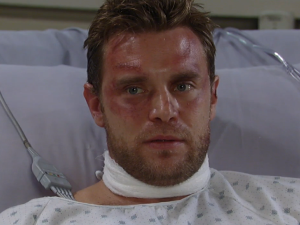 Some weeks should contain more soap viewing days. This week was definitely one that could have delivered more must see TV viewing hours. A build-up to Halloween is hardly noteworthy with all the drama that has transpired in the past few days. Are you on the edge of your seat?

Billy Miller, putting a face to the name.
Now Jason is the chatty type and I’m willing to bet he’ll keep the name Jake when his true identity is revealed. I loved Steve Burton and his representation of Jason, but it is time for the new era of Jason Morgan to begin. Makeup did an incredible job of leaving viewers with a hint of familiarity about Billy Miller’s face. His new Jason persona is welcoming so far. Fan ‘oltllover’ commented, “Billy is a cutie and personally I am glad he is not ‘jason-y’.” It’s easy to look forward to the coming weeks and whatever this storyline has in store for us even if it involves Helena Cassadine and Jerry Jacks.

How could they get it wrong?
Yes, as many could have predicted, there’d come a time when the dregs of Port Charles society would make their presence known. Jerry and Helena cemented themselves into a questionable storyline that already left viewers pondering the question of who Faux Luke is for far too long. Truth be known, it is not likely that Jerry was the one parading around as Luke Spencer so in my world, I think there is another Helena minion out there. The story started to seem weak around the point that Jerry didn’t know Michael was in charge of ELQ. Not possible. Every move in ELQ makes the news, unless Julian was too busy with Sonny or Alexis. The twist to this storyline had better be great.

Too soon?
Apparently the powers that be couldn’t make the leap to stretch out labor until Halloween. That’s probably a good thing. As it looks now Ava could be ruining Sonny’s plans to eliminate Franco. He might have a problem focusing on two revenge killings in the same month. Shawn’s long list of candidates with motive was a big fail since most were family and friends of Sonny. It was perplexing how he came up with Heather. It seems a stretch, but hey, Halloween’s coming up, Heather should come out to play. Can you say BLT?

Best man.
That was the campiest wedding planning scene ever with Maxie, Lucas, and Bobbie. Maxie was rocking that purple dress and sported quite the attitude over her forced separation with Nathan. It was preferable to having her complain about it to Lulu, which sometimes becomes monotonous. The writers thought this out wonderfully. It was refreshing to just have her work her magic doing something like when she had a job for Connie. And most adorable…Josslyn sporting her own attitude while dressing up as one of the children of the corn. Meanwhile, best man became an oxymoron when Franco creepily asked Michael to be his. Not sure about anyone else, but I'm starting to think that this wedding is definitely going to be predictable, going the route of a few weddings and christenings before where full disclosure of some hidden secret(s) will be exposed. At least we had the nu-Franco reincarnated as the old-Franco during his visit with Heather which was deliciously devious perhaps foretelling that the wedding will be an event worth waiting for.

For shame!
Sabrina – pathetic one. Nice effort in trying to protect Ava for her error in judgment. Don't try calling for help or anything. Surely she must know that. Shame on Felix too. He had no trouble finding fault in Brad for his past lies and medical manipulations. At least Sabrina showed some backbone and helped add intrigue to the death of AJ storyline.

Everything's coming up Liesl.
Liesl and Madeline sharing their legal troubles, and then child troubles, was entertaining. They better both be invited to Britt and Nikolas' wedding if there is one.

Beautiful.
Morgan coaching Ava was one of the sweetest things since Spinelli got possession of Georgie.

The truth about Nina.
A look back at last week's "GH" Rundown blog shows Nina was caught walking but the real fallout transpired throughout this week. As Madeline attempted to warn Nathan of Nina's propensity towards violence, Nina's rampage began, starting with Silas. Some people have a dream, but not Nina. She has a list which represents everyone's worst nightmare, including Madeline's who begged for her life. It will be sickening if Madeline steals Ava's baby for her mentally ill daughter. Granted, her lashing out towards Silas was deserved but she went full-on breakdown by the time she ran into Madeline. Perhaps someone will find an opportune moment to reach out to her in her time of need that doesn't involve stealing a baby. Take Soaps.com's General Hospital Poll: Who can help Nina?

Tracy to Jerry, "Are you a vampire now?" Jerry, "It does have a certain appeal."

Patrick to Sam, "I don't know if we should be worried for Jerry or Tracy."

Liesl to Madeline, "Did you hear I've been made chief of staff?" Madeline, "Is it a doll hospital?"

Madeline to Liesl, "My God, are you going to just keep on me like a buzzard on road kill?"