Ex-General Hospital’s Brianna Brown in Kiss Me, Kill Me 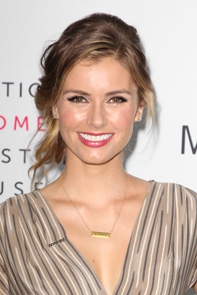 Ex-“General Hospital” star Brianna Brown (Port Charles’ ex-Lisa Niles and Taylor Stappord, “Devious Maids”) is set to star in the upcoming film “Kiss Me, Kill Me.” The project is being billed as an Alfred Hitchcock meets Agatha Christie-style “Who-done-it” set in West Hollywood. The plot has the main character Dusty confronting his unfaithful boyfriend, only to black out and later find that his boyfriend has been murdered and he’s the prime suspect. The film also stars Gale Harold (“Queer as Folk”) and Van Hansis (ex-Luke Snyder “As the World Turns”).

The film is directed and co-produced by Casper Andreas. The screenwriter and second co-producer is David Michael Barrett. To find out more about the film visit its Kickstarter page. You can also watch the Kickstarter trailer right here on Soaps.com.