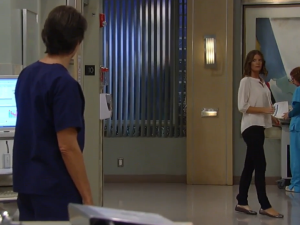 Minor and major annoyances didn’t take away from the sweet little vignettes that played out this week in Port Charles. The good outweighed the bad, even though the bad was quite ugly at times.

What was creepier?
Perhaps the writers were beginning to build up to the Halloween episode early with a series of creepy incidents. It was hard to determine which was creepier, Silas admitting he was seeing his wife, Nina and Franco spying on Sonny and Carly, Sonny and Carly reminiscing in the buff at Michael’s, Tracy leering at Patrick in a towel with the same look she gave Nik once, or Nina looking turned on after learning Franco was a serial killer. Maybe that is why she ran to Silas eager to make a baby later.

Deep love.
Oh, the reasons they are not meant to be, let us count them. Sonny’s belief that theirs is a deep love is going to get a whole lot of people in deep doo-doo. Franco was the saddest character on daytime this week until Sonny was seen dealing with his own troubles at the gym. Not again. He duked it out with his demons until he was struck with an epiphany to kill Franco. It’s all in a day’s work for the gangster. Carly will be sad next when she learns the truth about her glaringly gouache necklace. It’s a shame, Carly rocked that necklace with the black blouse and blue patterned skirt.

Caught!
Nina running through the hospital was one of the best moments she’s given us as Silas caught her red-handed. Her bad-girl silent look was beautifully played as well as Silas’ stunned deer in the headlights look. Oh baby, he’s on to her now. Bring it on! These two looked to be ready for a huge smack-down fight. Silas better dish out some of what she’s been serving everyone.

Carlos.
Too bad Carlos isn’t on more. It’s wonderful how he’s Sabrina’s moral compass. He was sad too after learning Ava tricked him into believing she had Sabrina run off the road. Maybe Sonny can get him blamed for Franco’s demise if he pulls it off. If anything happens to Nina though, that will have to be blamed on Rosalie who’s having as bad a time with her boss as Carlos had with Ava. Rosalie faced her own moral dilemma and looked to be failing.

Are you kidding me?
True, Britt was overdressed for breakfast but it seemed like she would be moving on up. Unfortunately the biggest fail of the week was how unromantic the whole arrangement turned out to be. Nik's short-lived dealings with Brook Lynn had more sex-appeal than this turn of events. "I'll arrange for my staff to pick your things up." Really? It felt like an insulting scene from the movie, "Pretty Woman." Meanwhile, despite Alexis being off-again with Julian, she's been so fickle lately that you expected the writers to have her jump in the hospital elevator at any moment to have sex with him again. The ever familiar man-speak didn't cease either and lived up to Alexis' assessment of him being another arrogant, deceitful and destructive man in her life that she just continues to have a weakness for.

Breaking bread.
While Patrick and Sam shared a bed, in an innocent sense, lunch at the Metro Court was getting interesting. The stories took their turns in the spotlight as Lucy tried to get over Scott's being with Bobbie. She was an entertaining third wheel for Duke and Anna but didn't hold back her punches as her and Bobbie had a verbal battle that was epically a classic.

I Googled you.
Monica's advice on dating to Silas was amusing and it was refreshing to see her stepping out. Okay, her choice in men is questionable, but to be fair, they met on the internet. Things were going well until the judge got preachy with Maxie and Nathan. This turned out to be a dumb plot twist to me and it seems Monica dating again is the only redeemable idea that the writers should move forward with. It was more enjoyable to watch Epiphany and Milo make nice.

If you're in it for the humor.
Sam and Patrick explaining space cakes to Tracy was a hoot. May she partake of her tasty morsel to entertain us next week. What probably wasn't funny was who walked through the door of the cafe they were at. Can't wait until Monday.

Who needs a hug?
Liesl does. Sometimes I feel for her more than I do Britt. She probably wishes she can have a do-over like Elizabeth and Jake/Jason, especially after her sister showed her face Friday.

Motive.
In last week's "GH" Rundown blog I shared how Franco gave Carly the evil eye. He hit pay dirt by keeping a closed-circuit eye on her and Sonny but this week he wasn't the only one scheming. After Sonny got it into his head that he's the guy for Carly, he considered taking care of Franco. Let us know who could Sonny possibly let take the fall for killing Franco other than Carly or Michael? Take Soaps.com's General Hospital Poll: Who could get blamed for killing Franco?

Franco to Nina, "Hey Nina you don't know this about me because you were in a coma, but there was a period of time in my life where I kinda had the market cornered in crazy. It's time I reminded those two of that."

Franco to Nina, "You Google me." Nina, "Uh this is…" Franco, "Twisted? Proof of my galloping insanity?" Nina, "You did these things? You killed people?" Franco, "Well if it's on the internet it must be true."

Nina to Franco, "But it says on the internet you had a brain tumor and you weren't responsible for what you did, and you got that tumor taken out so you're a different person." Franco, "I take back what I said before. You can't believe everything you read on the internet."

Anna to Lucy, "Oh Lucy, I realize this is just hyperbole but you really don't want to be discussing murder in front of the police commissioner."