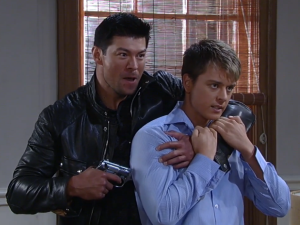 More questionable acts and post-murderous mayhem ensued in Port Charles this week that left us wanting just a little bit more. Popcorn anyone?

Oh, for Heaven’s sake.
Just when we thought we were over Maxie stroking a man’s ego and then declaring she needed to be alone. It’s time for her to get past that. Nathan needed to shut Maxie up with a kiss. What on earth could Maxie possibly need to know about Nathan that she doesn’t already know? Oh, and another, ‘meet me where I’m going to be if you change your mind’ scenario. Geez, that’s never been done before. At least with a Maxie storyline you can expect a bit of humor and her trip to visit Morgan to get relationship advice paid-off in spades. One could almost picture those two hooking-up after the way they made sense of each other somehow. His admission that he agreed to help just to get her to stop talking was the icing on the cake. The funny thing was that much of what he had to say ironically had more to do with him and Ava than with Maxie and Nathan.

No body, no gun.
And so it is with Michael, daddy has taken away the bad man and all is right in the world. “Life goes on,” quotes the young Corinthos. Kiki was the yin to that yin-yang storyline. I loved her struggle with lying to Michael. Her tears were probably a hundred more times real compared to Ava’s struggle to confess her lame story that didn’t measure up to even half of the truth. It’s a surprising thing that Kiki has any moral fiber in her at all given who her mother is. Most viewers are probably waiting for the whole truth and nothing but the truth to come out about Ava.

The evil eye.
Franco’s front row seat to a day in the life of Carly was so Franco…and so bizarre given the backdrop of him and Nina speculating. It’s not that I want her to get caught, but I do want to see the return of the character that is Franco, even if it means Carly has to wear out that atrocious necklace. Anticipating which way Carly will fall and what Franco will do on Halloween after he caught her giving in to Sonny’s advances has me on the edge of my seat.

John Doe.
Not much could melt a viewer's heart more than little Danny running to Jason's room to keep vigil by his bedside. That Jason's vitals were improving at being so close to Sam was a testament to the love that is Jasam. The storyline surrounding Jason's inactivity in a hospital bed this week was more productive than him running around mute last week.

Not my father.
Say it louder sister! Yes! It's about time someone said this about the real Luke. Lulu not believing her father is plotting against Sonny was the best. Why Anna hasn't arrived to this conclusion after living with Lavery-masked Cesar Faison is beyond unbelievable. Tracy, her faith in Luke has always waxed and waned, but after their reunion on Cassadine Island you would think at some point she really would have believed he was not acting himself. That she didn't consider Kiki's accusations against Faux Luke during her discussion with Dante and Lulu was disheartening. There's sure to be a heartfelt apology from Tracy to Kiki when this wraps up but one would think she'd at least remember how off-kilter her Luke has been. In the end, after all their posturing, why was it that Dante and Lulu decided to stay in Port Charles? It seemed so odd and a huge fail that Lulu, a Spencer, was not going to Amsterdam to confront the situation head on.

Sabrina.
It's not clear if they know what to do with Sabrina anymore. Enough said, maybe not, perhaps she could go review John Doe's charts and point out the obvious to Patrick and Elizabeth.

Amen!
Lulu and Maxie, friends again. Friday these two bonded over their life issues and post Crichton-Clark drama. The bromance between Dante and Nathan was comfortable too but the weird music between the two scenes felt like someone was going to break into song at any moment. Meanwhile the bonding between Patrick and Sam in-flight to Amsterdam gave the feeling that the two were about to have a future together as much as Elizabeth might with Jason after she made bedside confessions with Monica in Jason's room. Final Amen - Maxie showed! Will anyone be as happy that Sonny bedded Carly again though?

Julexis.
In last week's "GH" Rundown blog Julian's baiting of Alexis failed but this week she returned the favor only to have him play hard to get until he hooked her for good. Was it too soon? Let us know what you think about Alexis' decision to cave in Soaps.com's General Hospital Poll: Alexis and Julian, good idea?

Sonny to Carly, "It's the perfect gift from the King of Evil."

Kiki to Morgan about Rosalie, "She's a real crusader for the truth, isn't she?"

Nathan to Maxie, "Maxie, I want to know you, not your rap sheet."