Monster.
The story that brought the biggest return was Franco's awakening. At first it was worrisome that his party on the Haunted Star might have been the highlight of his return, especially given the fact that there were more attendees at that soiree than this birthday party Carly tried to throw him. Then, it seemed as if he was crashing and burning when he proposed, but the hint of madness returned after the crazy surprise proposal to make an honest woman out of Carly. His suggestion at an immediate wedding date set for Halloween indicated perhaps he does have an ulterior motive. Oh yes, fans, save the date. October 31, 2014 is a Friday that will be sure to outshine the 2013 Halloween in Port Charles. Franco is a monster waiting to get out. For a moment it was nice to think that Kiki was pulling for him instead of just Nina, crazy Nina, whom we will soon see has no amount of crazy that can compare to Franco's. Of course if we wait long enough, Sabrina could be a formidable opponent in the crazy arena.

Coby.
Everyone was looking for Luke, except newcomer Coby who was on a mission from Faux Luke to track down Ava. It was an exciting close to the week when Coby promised an uncooperative Julian that he would go do Ava's job for her. Sounds like Michael's life could be in danger because Coby look to be more muscle than brain and wouldn't be able to find out what Ava had on Sonny. It is incredibly pleasing that they've jumped from the Cassadine excitement at Crichton Clark back into the quest to find out who Faux Luke is especially since Robin and Helena drove off and the rest of the story may be months off for all we know. Jordan and Julian make a pretty good team. Here's to hoping she gets Julian to help the good guys out after she finds a way to save Michael next week.

Grand plans.
In last week's "GH" Rundown blog it was a complaint of mine how Helena returned from her deep freeze. This week began just the same after the overdone feeling of the use of Patrick and Emma as a threat to Robin. The air of mystery as to what turn of events could take place in Port Charles soon with Helena back at the helm of the Cassadine family always piques my interest. Let us know if it piques yours too? Take Soaps.com's General Hospital Poll: Looking forward to Helena?

Let's digress.
It came to mind that Ava and Helena would make for a perfect villainous showdown. They are both so deliciously ruthless.

Franco to Carly, "So Little Miss Open Book, is there anything else you want to tell me?"

Helena to her henchmen, "Oh pity! I was hoping you were Duke Lavery. I've always had a weakness for that kilt of his."

Britt to Nathan, "Wow, you and I really hit the jackpot when it comes to dads, I get a lunatic…you get a homicidal maniac." 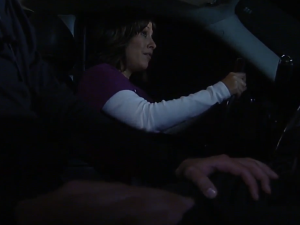 Credit: Again with this? (ABC)

Storylines got meatier and juicier and some heated face-offs between mobsters and lovers rejuvenated the pace of happenings in Port Charles this week. Despite some disjointedness in a few stories, can you feel Fall sweeps approaching?

Oh, for Heaven’s sake.
Stone Cold turned into Stone Silent and remained faceless in an annoying series of events between him and Robin that was nothing but boorish until he jumped out of a moving car. Fans were point on about a lot of the annoyances, including the bland disclosure by Robin to him that he was Danny’s father. In an even stranger turn of events, it was inexplicable how Anna made it back to the Metro Court from Crichton Clark for an evening with Duke before everyone else made it to the hospital to have their cuts and bruises checked out at GH.

For shame!
Sabrina, all for shame. She continued to be obsessed for all the wrong reasons. Where was Felix in all this mess? Girlfriend needs someone to drag her out of her funk. Her storyline ran rogue through the week and was as boring as Stone Cold’s.

We’ve still got it.
Duke thinks he and Anna ‘still got it’, but do they? It seemed the only spark of romance between the two of them was jealousy. Their love life may be more twisted than what festers between Sonny and Carly. The digression of Lucy dumping her Scott and Bobbie troubles on Duke caused minimal entertainment and a surprising outcome that seemed forced as if the writers just wanted to get that story out of the way. Who really had it was Morgan for Ava who asked her to stay and offered to ‘get close’ to Sonny to protect her. She showed another spark of her humanity when she admitted not wanting to get between him and his father.

Show me your guns.
Meanwhile, in the total hotness category of relationships, Shawn and Jordan rocked. There’s nothing hotter than two lovers with their weapons drawn in the heat of the moment except perhaps Julian posturing with Alexis over how he was more her type than Ned, ‘the overgrown preppy’. Julian may have been out of line and presumptuous but he does have Alexis’ number.