Shot through the heart.
Cupid was wielding his mighty bow and arrow as Sam and Patrick kissed and Franco was the recipient of Carly's affections for his birthday…even though she couldn't help but remember her time spent with Sonny. However, the best onscreen moment was between Maxie and Nathan. Fans waited too long for the two of them to be brought together. The warm fuzzy feelings may be over soon for many couples, knowing that Jason is on his way home and Nina is manipulating Morgan and Michael via Rosalie to get to Kiki. There was a nice balance of 'love in the air' where nothing was understated or overstated and lovers weren't clamoring for airtime all at once.

With friends like these.
Well if viewers were looking for characters they love to hate, Nina and Rosalie certainly fit the bill. It's one thing for Nina to want to be Franco's friend, it is quite another for her to want to destroy Kiki. Their nastiness was enjoyable considering most everyone else was on the straight and narrow path, anyone that wasn't a Cassadine anyway.

Something to kill you with.
Maxie couldn't have asked for a better accessory to commit murder with than that bejeweled knife made from her family's Aztec treasure. While the Cassadine stories lingered on, the Peter Harrells met a swift fate. Too soon? Maybe, but Port Charles has to make way for their next crazy, apparently Sabrina. Now that Maxie has put Levi/Peter behind her, she and Nathan can make soap opera magic. Fans will need the distraction to remove the aftertaste of the questionable twists in the storyline from one generation to the next. The discrepancies detracted from the storyline a little as viewers racked their brains trying to remember if Levi's account of what Maxie's parents did to his father was true.

Sabrina.
Last week's blog noted how Sabrina was acting off-the-charts crazy and this week only got better. Perhaps there is something more to this character than we realize, hopefully something more exciting. Sure, it seemed a bit out of character for her to be tricking Ava into taking drugs to end her pregnancy prematurely, but Sabrina was after revenge. Could she have a genetic bent towards seeking out her enemies for retribution? Take Soaps.com's General Hospital Poll: Sabrina is? It will be interesting to see Sabrina's downward spiral after she finds out that Victor Cassadine was responsible for the death of Gabriel.

Let's digress.
While Britt was sporting a new hairdo Nina was still stuck in the 80s with her remembrance of Richard Simmons. It was surprising she wasn't wearing leg warmers. Girlfriend needs to fess up that she can walk and join a Zumba class. Levi/Peter's death scene was a bit of a throwback as he struck a pose on his way down to the floor.

Obrecht to Victor, "Two people can keep a secret if one of them is dead."

Obrecht to Victor, "A pulse?" Victor, "I don't cease to disappoint you, do I Liesl?"

Maxie to Nathan, "I love danger. I'm holding the gun."

Helena to Robin, "It's lovely to be back." 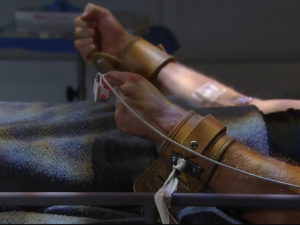 There was lots of bonding, trickery and deceit in a week that had its pluses and minuses but maybe that was only if you were keeping track of who returned from the dead versus who died. Did every day feel like Friday?

Give me a break.
Not Victor! Did he have to die? Seriously, okay, maybe he didn’t actually die, but for argument’s sake Helena could have stayed dead and Victor could have lived. Sure, let’s throw Constance Towers some love for playing the “General Hospital” villain of the last decade. She held her own even while others came and went. She’s sure to offer up some new excitement in Port Charles to torture the Spencer family again but it was at the expense of Victor. The writers did the dance. It was one step forward and two steps back. For a moment it was easy to be tired of it all. When Lulu fake-passed out it was dreadful and most certainly a collective sigh of “Oh, here we go again” interrupted our thoughts, as it did when Robin saw Helena. The whole escape was most exciting, maybe more so than Lulu’s last rescue, although I did think, “Where’s Spinelli when you need him?” Cop and spy skills were at a minimum during this rescue. It was a good thing the guns always fell into the right hands so all the good guys could battle efficiently. Robert’s rogue WSB agents came well in advance to lend Anna an assist.

For shame!
Shame on me for loving the evil Stavros Cassadine scenes. Loved, loved, and loved them! Shame on Helena for swooping in after his death to carry out his dastardly plan. Shame on Obrecht for finishing Victor off, if that is what she did, and double shame for keeping Nathan’s father’s name a secret. Perhaps it is Faux Luke…whoever he is. Inquiring minds need to know if the Cassadines own any real estate without hidden catacombs.

Oh, for Heaven’s sake.
Yes, Jason Morgan is no ordinary man. He was also a man without a face. He had hands though, which if I might say so myself, were hands down the best acting hands in the soap industry. This writer has already made a request to nominate them for next year’s Soaps.com’s Sudzies. Despite the attempt to hold back the Jason-face reveal, it was interesting to have the juxtaposition of him and Robin reuniting while Sam and Patrick got closer together back home. That little get-together was fortunate and really nice but as both characters concluded, now may not be the time. Alexis was more excited by the whole affair than Sam was and their moment together discussing Patrick was too funny as she noted he was the cutest guy in Port Charles. Alexis better take a moment to note that Patrick is her daughter’s love interest, not her own distraction from Julian.