About time!
It was about time that Maxie and Nathan were thrown together, that Emma took charge of Spencer and made him out Luke, and that Dr. Silas Clay was ready to consider what Sam said about Nina possibly having something to hide. It was also about time that Obrecht and Anna had their serious face off about what happened to Cesar. Too bad Obrecht interrupted when Anna was about to tell Britt the truth.

Give me a break.
Those were some dirty tactics having dimpled-faced Sonny holding Rocco to seduce Carly. Sadly, they're the only couple that has it going on.

Know too much.
Yes, the younger cast figured out so much on their own and surprised us with their antics. They are integral to the Spencer and Cassadine story that must transcend the existence of Luke, Robert, Anna, Victor and Nicolas.

Old men.
Last week's blog touched on Alexis' desire to find a new man. This week she sang a different tune and asked Ned to be her man. Ned was quite accommodating, scoring 2 for 2 with women looking to make a point with their exes but was it a great idea? Take Soaps.com's General Hospital Poll: To date or not? I'm voting it's not such a great idea, for the women at least. Ned's actions lose their sincerity when he plays friend or lover with two women on the rebound at the same time. Unless he has feelings for Alexis that he'd like to explore further, he should take a break from this entertainment.

Let's digress.
Antonio Sabato Jr. - Port Charles' ex-Agent John "Jagger" Cates who was Stone Cates' brother and Robin's friend. ​Is there more to be said? The "Dancing with the Stars" commercial featuring him needs more airplay.

Maxie to Nathan, "I don't know what Coco Chanel was thinking, chains are hideous."

Maxie to Nathan, "We got the paperclip…what do we need it for?"

Julian to Danny, "I can't exactly quit the business because my boss has the management skills of Idi Amin."

Felix to Jordan, "Well, as glam as the fourth floor may be we don't get much paparazzi."

Felicia to Mac, "You saw right through Levi the first time we met him." Mac, "Felicia, the guy didn't eat meat." 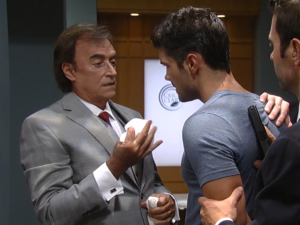 Crazy just got crazier this week between the chambers of horrors at Crichton Clark and a nurse on edge back in Port Charles. The intensity brought us to week’s end with appreciation and disgust.

Oh, for Heaven’s sake.
Nurse Crazy-Pants Sabrina Santiago gave us pause this week as her character deteriorated into insanity. It was fun watching Ava squirm. It was proof that Britt was lucky Sabrina was only 10 shades of crazy when she delivered Rocco, and not the 50 shades of crazy she is now. Despite that, Jordan trying to bond with Ava who later panicked us all with false labor was just as fun. Jordan apparently would take down the devil herself if she had the opportunity. She did have trouble handling Felix so she’d probably be less likely to take down Faux-Luke without a whole lot of luck.

DNA test.
The Cassadines obviously own stock in DNA testing companies. What a hoot to watch Victor wonder if Nathan was his son. It’s hard to figure why he’d be mad at Obrecht. It sounds like she learned from the best in deception, perhaps Helena. I’ll just die off shaking my head if the DNA results are tampered with moments after Helena is revived – not saying she will be, but if she was. This would be the type of thing that would thaw her out. Watching Stavros and Victor interact brought to mind that the Cassadines are like the Mikaelson family from “The Originals.” Perhaps they are the original ‘originals’.

Door number three.
Wouldn’t it be great to spend a day opening all the doors at Crichton Clark. Nathan and Maxie were handcuffed in one room. Dante was watching Stavros bait Lulu. If viewers thought they would find Jason behind door number three they may have been surprised when Peter Jr. introduced Maxie to his father. We had to wait until we got to door number four to find a hint of a patient in restraints.

Stavros.
Yuck, well okay, ingenious, but disgusting all the same. The man is soap opera gold, at least for “General Hospital.” What we really need to see is more of that Cassadine family together on the screen. It would be off the charts crazy. Listening to Stavros boast about his miracle of modern science/wonder of technology made me only think “Hmm, he’s quite taken with himself, more so than Lulu.” Meanwhile Peter seems a worthy adversary of Victor.

Word to the wise.
If Dante decides to follow through on his promise to kill Stavros could he not do it next to a cryogenics chamber.

Spencer.
Should they be leaving Spencer alone, haven’t they heard how he duped everyone? It was totally shocking that Spencer didn’t take off with Emma while Sam and Patrick finished up their lunch. Seems like a missed opportunity on the writer’s part to spice up the pre-tween storylines.