Total sweetness.
Franco and Nina making up was a cool moment but not as cool as Spencer realizing Emma's worries over someone being after her.

We are family.
Last week's blog highlighted Britt and Nina's eerie family reunion. Ah, this week everyone was feeling nostalgic for family. Okay, Morgan's feelings were G-rated as opposed to Carly's R-rated thoughts that drove her to Sonny's side. Franco should be less enthusiastic to send her off to be with her family in the future. Kiki looked more afraid of Carly than she did her mob mother, but not as crazy as Nina looked trying to touch Ava's baby bump. It was kinda nice that Ava was freaked out a little about the very strange, very weird, "May I touch your baby," moment. Too bad Kiki couldn't have witnessed that craziness, and then perhaps she'd rethink her thoughts of her and Michael double-dating with Silas and Nina. It seems like that would be a lethal dose of trouble.

No introductions necessary.
Ava couldn't walk through the hospital without getting accosted by her new and old enemies. She wasn't turning on the charm with Nina to make amends for her 20-year-old transgression nor was she straying from her story of how Carlos got sent to Pentonville. She might have made amends with Julian and Kiki but she's got a long line of takers for a shot at her demise. Surely someone has the means to play tit-for-tat with her. Was Nina's 's*** shaming' just the start? Take Soaps.com's General Hospital Poll: Ava's greatest threat?

Let's digress.
I saw Minae Noji (Dr. Kelly Lee) in the "Teenage Mutant Ninja Turtles" movie reboot this summer and couldn't help but think how the storyline could have easily played out in Port Charles somewhere between the vampire and the return of the Cassadine dead story arcs.

Morgan to Sonny and Michael, "Maxie's probably used all of the oxygen in the room talking the guy to death."

Ava to Nina, "Okay, first of all, no one in the history of the world has ever uttered the words 'Poor Franco'."

Obrecht to Britt, "If that miscreant is Australian, I'm Canadian."

Julian to Ava, "Love is blind. I guess that rule even applies to psychos."

Nina to Rosalie, "Show me how to goggle baby equipment." Rosalie, "It's Google." 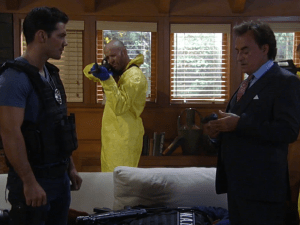 Credit: Maybe if you had a child. (ABC)

Mixed-up families, jilted and confused lovers, and possibly more questions than answers were delivered up this week. Was it delish?

Great expectations.
Wow, Dante and Nate took a whole police force to a gun fight. There’s something that hardly ever happens. Who knew the PCPD had that many policemen, or any who didn’t know how to surround a building and sneak in the back door. Could Nate be more obvious sneaking around the side of the building with Dante’s eye’s following him. That was great soapy fun. It’s a good day when a criminal gets shot instead of a cop, hostage, or former police chief. It was followed by the great fake out when a Cassadine minion announced to Victor, “Feel free to remove your mask.” Soap fan ‘Bizlet’ remarked in the forums, “Why are henchmen in yesterday and Tuesday’s episode dressed like CDA agents from ‘Monsters Inc’? I was waiting for one to slither in at the end.” That episode was as exciting as the music hinted at. The speculation that Nate is Victor’s son was expected, but Peter’s ties to Victor might not have been.

For shame!
Shame on Shawn who is eager to take Franco out. Shame on Ava, again for everything, like making Carlos think she caused Rafe’s accident with Patrick and his family. Shame on Patrick for shaving. What can we say, it was pleasantly distracting. Shame on Nina for asking Rosalie to sleep with Michael to hurt Kiki. That was the biggest shameful act this week. Rosalie might be reconsidering whether she’d rather be on Nina’s list instead of sleeping with Michael. Nina definitely crossed a line but maybe Rosalie might warm up to the idea since Michael’s easy on the eyes.

New men.
Alexis might not need a new man, but she needs a man. It’s easy to applaud her sticking to her guns but so sad to see her so sad. We’ve waited a long time for her to recover, regroup and date again. Don’t take that away. Free Julian from the mob or make that woman happy again.

Forget about it.
This storyline is so long it’s possible viewers did forget that Ava had motive to run Sabrina off the road to keep Carlos in line. It was great to see Carlos but his story seemed out of place and past its prime. The storyline coming our way seems to hint at Ava’s baby being kidnapped by Nina or Sabrina with one of them taking the fall. Who knows, maybe it’s been too long since the last baby drama in soap years.

Let the truth be known.
So much to tell. Outside of Victor coming forward as the catalyst behind the Aztec jewel thievery, most major plot points this week involved someone hearing something they shouldn’t have heard or someone telling secrets they promised to keep. It was hard to predict which disclosure would be more entertaining, probably Morgan finding out about Carly and Sonny.