Check out the "General Hospital" news section and save the dates for upcoming fan events including music with Rebecca Herbst and Scott Reeves this August. Read Soaps.com's latest update on Retro TV airing The Doctors soon.

Two reporters on a witch hunt.

A throwback to 1983 Port Charles on “General Hospital” has a police commissioner dealing with a murder and missing evidence obtained by pushy reporters.

Sam recently divulged Patrick’s confession of wanting to kill Rafe on the operating table to Silas who suffered her wrath even though he had not been the one to convey the information to a reporter. Similar shenanigans happened in the eighties during a real murder investigation.

In 1983, Susan Moore was murdered and a clue of a missing note from a notepad at the scene was all the police had to go on. That was until the mystery note started making the rounds between individuals while the crime was being investigated. Before the note made its way into Robert Scorpio’s hands via the front page news, Burt Ramsey had given Robert forensics from the left-behind notepad that detailed that the removed note read, “Call bank regarding Scotty’s forgery.” Scotty was booked for murder but the note’s appearance in the newspaper mucked up the works for Robert and agitated Lee Baldwin who tried to convince Scotty that Heather was the anonymous person who gave the note to reporter Jackie Templeton. Scotty was convinced that Heather did not implicate him and couldn’t believe the police were responsible either.

Jackie and her editor gloated over making the PCPD look bad for reporting that an anonymous person had tipped them off. Do you remember who the anonymous person was? Vote in Soaps.com’s Throwback Thursday Poll to tell us. 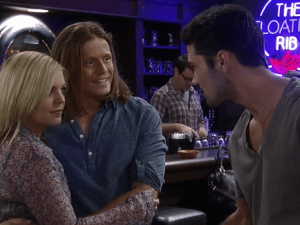