Enough luck to last a lifetime?

A throwback to 1968 Port Charles finds someone from “General Hospital” making art therapy house calls to heal a broken heart.

Franco recently shared his surprisingly good news with Carly about Dr. Obrecht appointing him to the position of art therapist to help restore patients’ health, a position similar to a role Nurse Lucille March took upon herself in the sixties when she made a house call to her grieving sister on a whim.

In 1968, Audrey was recuperating at home following a car accident that killed her unborn child. Concern at the hospital grew for her when it seemed like her grieving would last an eternity despite her having so much to live for and according to her sister Lucille, “Enough luck to last a lifetime.” Lucille chastised her for neglecting Steve who could not understand the place Audrey was in. Lucille appointed herself the ambassador of reason and approached Steve with the idea that she should talk to Audrey.

Lucille arrived at the Hardy’s armed with magazines, bridge cards, knitting needles with yarn and a drawing pad in hopes that Audrey would learn if she had any artistic talent since drawing was all the rage. Audrey was tired of people trying to cheer her up and made it a point to let Lucille know how angry she was with her and Steve for getting rid of all hints that there was a baby coming, especially the sweater and blanket she had made herself for the baby. Instead of leaving Audrey post haste following her outburst, Lucille made it clear that Audrey’s behavior was harmful to her marriage. Audrey agreed to try to make things work.

Before Lucille went to visit Audrey, she and Steve agreed that it was too soon to let Audrey know one thing. Do you remember what they were keeping from her? Vote in Soaps.com’s Throwback Thursday Poll to tell us. 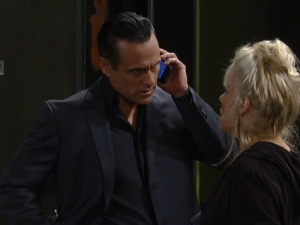