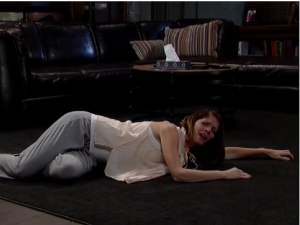 It was hard to tell the monsters from the babysitters and the babysat this week and it’s possible the feeling that something big could happen has fizzled out. Is it just a slow start to the summer in Port Charles?

Oh, for Heaven’s sake.
It’s surprising the only help Franco needed babysitting Joss was Kiki. It’s too bad Heather wasn’t on more amicable terms with whoever replaced her last benefactors. With her stuck in Miscavige, we’re missing all the great moments she could be having with her possibly, soon-to-be step-grandbaby. Who knows, her and Joss might hit it off someday. What we do know is that there will never be any love lost between Carly and Ava.

Monster.
Ava aims to please in the mean category. It’s surprising that woman hasn’t been the death of Sonny yet. Threatening to drink pregnant was not cool. Sonny deserves what he gets though. Nine months of torture can’t be enough for all his mob crimes.

Tag team.
Even meaner this week, Nina and Rosalie, who apparently has been in training for the part of her life while Nina was in therapy. Here’s another man who could get what he deserves. Really, Silas hasn’t thought to consult with all of Nina’s doctors yet? What would be really nice to see is Obrecht messing with Nina at the hospital. Even better, Britt and Brad could mess with her after they know she can walk.

Camp Lila’s Kids.
The only thing remotely entertaining about this would be hamming up Alice more. Alice should stick around. She might be the one who could foil Faux Luke’s plans.

How to recapture a Cassadine.
Dr. Obrecht had me at “potent” but overall the slide show was entertaining. It’s hard to believe her Britta could keep a straight face. The bit might have been funnier if the slide show accidentally was played during a true efficiency seminar.

Good news.
Franco and Sam are working again. Yes, it is about time.

When you need a friend.
Sonny's one lucky guy. He has his son Michael holding him up; enough so that he must feel like crap for killing AJ, and his only recourse is to lean on Carly. The only problem is that Franco minds this very much. Both men better slow their roll before they digress from keeping Ava in line.

Defending Levi.
Last week's blog disclosed the true colors of Levi's intent after Maxie's hearing. Too bad Nathan has nothing to wipe that smug look off of Levi's face yet. Come on, Maxie's a player. She's manipulated situations better than Levi could ever hope to. It seems we have to wait for the writers to play catch up before her aha moment kicks in. It's sad how far behind they are. Maxie doesn't appear to be quite the activist she needs to be while Levi made his statement to Morgan and Kiki at the brownstone.

Friday Follow-up.
A few reconciliations were brewing. There was the moment between Michael and Morgan where Morgan seemed sincere in his gracious acceptance of Michael's hospitality. Tracy was less sincere and it was worrisome to wonder what part she thinks she will play in the development of the waterfront project. Rafe and Molly reconnected in a mature way as did Kiki and Morgan. It seems the young adult scene has shown much growth following the tumultuous year and it is welcoming. Wish we could say the same for the elementary kids and their peers, Sonny and Franco. I was hoping Carly would leave the two of them alone in the park to slug it out. Sonny's laughing now but he might not be next week. The music on Friday was as sinister as last week and after showing us Rafe leaving flowers for Gabriel by the side of the road before Sam saw who drove the car that ran Patrick off the road, we saw Franco enter Michael's office. Monday will surely deliver two explosive scenes if Patrick hears whose car it is and if Franco tells Michael who shot AJ.

Sonny and Carly?
Franco's worried but some fans are hopeful that something could spark between Carly and Sonny. Is it possible? Take Soaps.com's General Hospital Poll: Carly And Sonny Again? Personally, I don't see it but the writers could go there. Maybe five times' a charm.

Best dressed – Franco had a slicker suit than Sonny, it was art.

Cutest moment – Obrecht hoping to be the recipient of one of Franco's mind games.

Biggest fear – That Franco would comfort Obrecht with a hug or something while she lamented over her loss of Faison.

Scariest thought – Spencer and Joss get married and have kids someday.

"Star Wars" movie nod - "Help me Uncle Sonny, you're my only hope."

Too adorable – Maxie's enthusiasm for the waterfront project and Levi trying to refocus her attentions to its evil.

I knew Levi reminded me of someone . . . just needs to stick his finger in a light socket :) #GH #generalhospital pic.twitter.com/hqgwE9pugV

@BlueWizard75 Hey!! Yahoo Serious! Brilliant! He and I are from the same town, Levi isn't :-) flattering parallel! ZG x

Daytime Emmy rumors dispelled – Maura West (Ava Jerome) and Tyler Christopher (Nikolas Cassadine) are not married, but it's still possible that Christopher could be Superman.

Best post-Daytime Emmy sentiment – "I knew 'GH' was not nominated for much, but I was hoping they would win something. I really thought BC [Bryan Craig] would win younger actor, and I also thought JT [Jason Thompson] should have won Best Actor. Oh well, maybe next year it will be better. Even though this awards show is the worst, I still think these people deserve their award show. Daytime people probably work harder than most in television, and they deserve some prestige." - oltlforever31

Joss to Franco, "It's still 'Children Of The Corn', I just don't want to watch it with you. That'll ruin it."

Rosalie to Nina about "kind" Sam, "She's been even kinder to your husband."

Kiki to Morgan, "I'm sure you're done with Jerome women for a long time." Morgan, "I don't know, I hear your grandma's kinda hot actually."

Find out which "GH" alum turned up on the red carpet for interviews with Soaps.com along with other stars including Kristen Alderson and Chad Duell at the 2014 Daytime Emmy Awards this week.