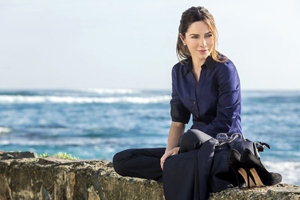 Vanessa Marcil (ex-Brenda Barrett, “General Hospital”) stars in the upcoming Hallmark movie “Stranded In Paradise.” James Denton (Mike Delfino, “Desperate Housewives”) also stars in the film. The movie is based on the novel Stranded In Paradise (Women of Faith Fiction) by Lori Copeland. This is Hallmark’s first movie shot on location in Puerto Rico.

The movie centers on Tess Nelson (Marcil), a driven executive who uses an upcoming business trip to Puerto Rico to try and land a new job. Unfortunately the trip turns into a disaster when she is stranded thanks to an approaching hurricane. Nelson meets a handsome traveler named Carter (Denton) and the two are forced to take shelter together as the storm approaches. Nelson’s adventures may lead her to a happiness that she never dreamed of.

“Stranded In Paradise” will have its world premiere on the Hallmark Channel on Saturday August 9 at 9:00 PM EST. Check your local listings.