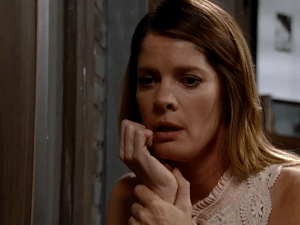 The honeymoon's over. (ABC)

Oh, it was soapy goodness this week with the true colors of more than one character trying to bust through. They weren’t fooling the viewers.

Oh, for Heaven’s sake.
So, Nina has been awake long enough to be able to accept her life has changed drastically, but she can move on and support Silas and Sam’s relationship? Maybe about as much as Sam can easily accept that Nina’s moved in with Silas. Sam appeared all understanding of Nina’s predicament until she learned of her living situation. She couldn’t seem to wrap her brain around it. How big is Sam’s penthouse? What, Silas can’t move in with her? There are two other capable humans living with Nina…and probably room for Nathan who should be happy to move out of the Temple of Levi. But no, Sam had to go and display her insecurities and it didn’t take long for Nina to use it to her advantage. Oh, she’s a worthy adversary. Game on!

Living arrangements.
Nina’s not the only one with housing woes. Morgan’s busy trying to find a place to call home when he can’t move out fast enough after Franco’s pop art takes over Carly’s home. Why he should care after his misconduct with Ava is a hoot. Sadly for Franco, he just became the live-in babysitter because of course Sonny needs Carly. They’re the two musketeers who can’t convince even Dante that they can tell the truth.

Vengeance.
Oddly, the man who would try to kill his own sister is upset over Ric Lansing’s predicament. No more hatred no more violence? He may not be dishing it out anymore, but one thing’s for certain, Duke hasn’t stopped obsessing over what his and Anna’s kid would be like today if not for Julian killing their baby. The mob war has turned vengeful for both Duke and Sonny for very personal reasons.

True colors.
Suddenly, loss of life bothered Levi but he had no problem dishing out some violence. Was there anything not funny about the physical and verbal altercation between Levi and Nathan? Violence wasn’t his only issue. It was too easy to suspect that he was responsible for Maxie’s moved up court date and the judge trying to force Nathan into lying under oath. Oh look, here comes Levi to save the day instead. I’m not buying it. Meanwhile, all is right with the world when we can appreciate that Ava’s character hasn’t changed her lying ways. After watching Julian lie to Sonny about Ric we can see where she gets it from. Less sinister and just plain silly was Franco. His amusing ways helps us to believe that he is Heather Webber’s offspring. What wasn’t believable this week but passed right under Michael and Kiki’s noses was Tracy in cahoots with Faux Luke. ELQ hasn’t seen this much action in ages. It’s exciting that the last standing Qs won’t go down without a fight.

Over.
As family pulls together, it was seemingly time for Patrick to admit to someone that his marriage is probably over. He's not the only one grieving. Rafe was an unexpected mourner at baby Gabriel's funeral. It's unclear if Nina got through to him or if he will try to dull the pain with drugs again. There is a theme that viewers are not happy with the writing for turning Rafe into a bad kid. The truth is, given what has happened in his life; this doesn't seem all that out of line for someone who's lived through certain circumstances. We felt Sonny's grief as well as he continued to dwell on Connie amidst suffering the loss of Ric. It was like a double-edged knife going in to watch Anna tell more lies when he came to her asking for the truth before he buried his brother.

That's tough...brother.
Wow, whose life sucks the most, the man whose dad could be the father of his girlfriend's baby or the man whose stepfather killed his father? Viewers probably thought to themselves that these characters wouldn't be able to handle the truth as we watched them try to discern who had it worse off. Kiki was certain she had it the easiest, having only to worry about if she was having a brother or sister as opposed to a son, daughter, sister or brother.

Josslyn.
Love her, she looks like Michael and NuLuLu. Great casting but it is a little disturbing that most of the children introduced are written as ill-tempered.

Can you hear me now?
In last week's blog I commented on Anna and Jordan's meeting in the park, and low and behold the show kept true to form this week when the two of them attempted another clandestine meeting at the art gallery. Exactly, it is as crazy as we all think. Of course TJ interrupted them but was clueless as to what was going on. Perhaps they'll meet on Alexis' deck sometime next week while Julian is taking one of his "business calls" that tear him away from his Ozzie and Harriet lifestyle.

Friday Follow-up.
The power play between Julian and Jordan added some kick to the drama. Anna dropping hints that Julian was a bad idea to Alexis gave Alexis pause that Anna was not telling her something. The best was when Alexis took Anna down a peg, insinuating that Duke could no more be trusted than Julian. Sam hit the nail on the head in pointing out to Molly that Nina was too understanding. At the same time Nina took every moment to point out Sam's weaknesses to Silas. The subtleties of these events weren't as nerve racking as what followed. Maxie lost custody of Georgie again but it was time for a happy dance when she told Levi off and more endearing how she was accepted by her friend Lulu. I can't wait to see what Nathan has to say to him Monday. The best to close out the week though was the eerie music, the arrival of Faux Luke's mob associate Mickey Diamond, and Nina going all crazy-eyed when Silas left for his date with Sam. I was starting to question why we never saw her in therapy. I guess Friday's show explained that. Wow. That character just got more interesting. Between her and Mickey I think the summer shows will be must see.

Sonny-Carly-Mommageddon.
Molly left home and is doing her best to avoid the people most toxic in her life right now. She has a pretty good idea that she knows who the true enemy is. However, the question isn't who is the true enemy anymore, it's who will put this storyline out of its misery already to tell us who Faux Luke is and what his motives are. It's not going to happen anytime soon, but if you could hazard a guess, who do think could figure it out? Take Soaps.com's General Hospital Poll: Who will find the truth?

Greatest segue way – The scene of Josslyn calling Franco a psycho cutting away to the scene of Nina talking to Sam. It's one of those things that make you go "Hmmm."

Biggest wish – That Kiki partners up with Sam in her PI business.

Best new landmark – The Borg of shrubbery planted in the middle of the park.

Lowest of the low – Levi if he told the court about Nathan lying for Maxie.

Olivia on Broadway – Musicals remind her of Sonny. Rocky, Bullets Over Broadway, Wicked, and Kinky Boots?

Nathan to Levi, "I'm saying, Maxie ate my meat and she liked it."

Levi to Maxie, "It wasn't about the meat; it was about the way he threw it in my face."

Carly to Franco, "You're going to let a little girl scare you away?"

Molly to Julian, "Who's on the phone Julian, your real boss?"

Friday's show may have warmed us up for Monday, but Soaps.com will keep things heated over the weekend with coverage of Sunday's 2014 Daytime Emmy Awards. Don't miss the live blogging between great reads of Soaps.com Emmy Winner predictions, news of upcoming events, and highlights of past coverage.