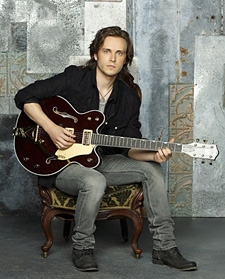 Jonathan Jackson (“Port Charles'” ex-Lucky Spencer) will be appearing on the Tuesday June 10 episode of ABC’s “The View.” Check your local listings for the time and channel. Jackson, who stars as Avery Barkley on ABC’s “Nashville,” is also the guitarist and lead vocalist for his band “Jonathan Jackson + Enation.” This will be the national TV debut for the band who will be performing their new single “Everything Is Possible.” The single will be available for download the same day from his website Jonathan Jackson + Enation.

In addition to Jackson, the band is composed of his brother Richard Lee Jackson on drums and their long time friend Daniel Sweatt on the bass guitar. The band’s upcoming forth album “Radio Cinematic” is due out in the fall on Loud & Proud Records.

The band will additionally be performing on “The Better Show” on Wednesday June 11. Check your local listings or visit The Better Show to watch the performance after it airs.

To find out how you can see other “General Hospital” cast members in person check out the upcoming General Hospital 2014 Fan Club Weekend. Also check out Soaps.com’s interview with Days of our Lives’ Lisa Rinna about her new show.

Box Office: Angelina Jolie’s ‘Those Who Wish Me Dead’ DOA as ‘Spiral’ Claims No. 1