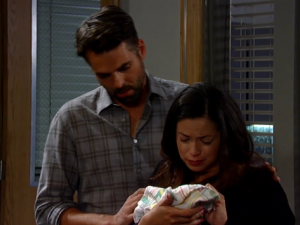 The melancholy start to the week lingered until sadness spread throughout the hospital, but not before Port Charles was engulfed in anger and confusion with the return from the presumed dead to two women scorned. Could we ever ask for more drama?

Oh, for Heaven’s sake.
Let’s start with the ridiculous mention of the week. Carly and Franco can’t keep their mouths shut. They are the bad bearers of bad news. They’ll do nothing more than anger Ava and hopefully we’ll be privy to her hormonal wrath in the coming weeks. There’s no one left for Carly to fight with so Ava is a suitable chew toy to keep her from going soft now that AJ’s gone and she’s friends with Sam.

Gabriel.
It was hardcore tissue time. The cast of the hospital staff pulled off the incredible heart-wrenching story of baby Gabriel’s passing that included Epiphany, Felix and Liz. It was devastating, touching and disappointing. Where was Robin? She’ll be sorry that she was gone. Her family is hanging on by a thread and it’s possible Patrick will make her pay for what she’s done by leaving her family. Hopefully Faux Luke will pay for this.

Goodbye Jasam?
Great timing for Sam and Silas to exchange their “I love you’s” to one another. It’s hard to wait for what will be the double whammy if Jason returns from the dead. At least we have Nina to entertain us with her quirky subliminal creepiness. It’s hard to tell if she’s threatening or if something’s mentally off with her after surviving her comatose state. We almost couldn’t wait for her to show up, but now it’s hard to want her to stay because she’s just there to muck things up for Sam and Silas. The truly funny thing was no one even blinked when they found out Silas’ dead wife was alive. It is so par for the course for Port Charles. What was more annoying was how everyone wanted to give Silas and Nina space. Julian suggested they needed their privacy. How about they leave Danny’s party and let his family celebrate his life without the creepy undead wife in the wheelchair raining on the two-year-old’s parade. Someone needs to explain what kind of a rehabilitation facility she was released from that doesn’t intervene with the family upon her release. She hasn’t been in the real world for something like twenty years and she’s ready to have her nurse primp her up for a goodnight cuddling session with the husband she was mad at before her mother drugged her. This trip is going to just keep on getting tripier.

Beginning of something real.
For Liz it was real, as in real bad but not for all the reasons she believes. Liz finds something wrong with her men right after she sleeps with them. This time it was only what Nik thought was wrong with Ric. Oops, there she goes again, falling into another man’s arms. She better watch out before Nik whisks her away back to Spoon Island.

Parents.
Enjoyed Britt and Nate comparing mommy notes and learning that she likes having a brother. Viewers probably like it too. At least it would be nice for her to have any relative that is normal. Meanwhile, Kiki thinks her mother is turning over a new leaf. I think group therapy sessions would be most entertaining at GH.

The Levis and MacCoys.
I agree, it was time for Levi and Mac to have a little talk…but really, I just wanted Mac to clock him one. Levi couldn't have been more annoying this week especially going out of his way to point out how Mac is not technically her father. It's a relief to know that Nathan is living there to keep an eye on him, or if he has to, to keep Mac from burying the hatchet in Levi's head. While Mac and Levi postured at the apartment, it was refreshing to have Diane return for Maxie's hearing and for Nathan to help a girl out. Diane's right, this one is a keeper.

Off the radar.
While there was a lot to cover in last week's blog after finding out Luke was an imposter, that story fell off the radar along with Ric's recent imprisonment. The tradeoff was acceptable since Maxie came back on the scene and Nina found Silas. The only hint of who Faux Luke was this week came during the Bobbie and Julian face off at the hospital when he declared that her family was more dangerous to Lucas than his. It was great to see Bobbie again. Her walking in on Felix and Brad fighting over Julian was delightful.

Three's a crowd.
Friday was a culmination of everyone settling into their new digs or routines and it was captivating watching Carly rescuing Franco from his new job of sketching in the park and Ava making herself at home at Sonny's while he attempted to make nice with Olivia. We were teased as the budding friendship between Maxie and Nathan grew under the watchful eye of Levi. I'm betting on Levi trying to ruin Maxie's chance at getting visitation of Georgie. Things are picking up at Silas' apartment which has turned into Grand Central Station since Nina made herself at home. There's no telling who will drop the bombshell that he's in love with Sam.

Thirty-six weeks.
Ava's full of herself now that she has her baby-on-board insurance plan, but is it guaranteed to save her from Sonny's revenge? She thinks so and relishes in the fact that it bugs Carly. It's fun watching these two trying to get the better of each other while they both manipulate Sonny to suit their needs. Take Soaps.com's General Hospital Poll to tell us who you think will have Sonny's attention until Ava's nine months are up.

Most cliché – Knock on the door show ender, nice setup though, we thought it was Nina and it turned out to be Rafe.

More exciting than a hail of gunfire – Carly and Franco learning that Ava was alive…or was it Silas seeing that Nina was alive?

Best dressed – Ava in her sapphire blue dress, cool colors are hot on her. Oh…wait a minute, Diane in for the tie.

Most delusional – Another tie, Ava and Nina.

Best meltdown – While Sam and Morgan's meltdowns were great, Molly's rant with Alexis over her favoring her other baby-daddies over Ric was spot on.

Most ironic moment - Britt advising Nate that Silas has a right to know about Nina. Let's not keep secrets.

Creepiest return from the dead of the week (because you never know when there will be more than one a week) – Nina.

Felix to Brad, "Oh, we are very much dating. In fact, we had a lovely dinner the other night until it was interrupted by a hail of gunfire."

Silas to Nathan, "For Ava, odd is any day ending in Y."

Maxie, "Nathan is my roommate." Diane chuckles, "Yes of course he is, well lucky girl."

Carly to Ava, "How do you like me now, baby mamma?"