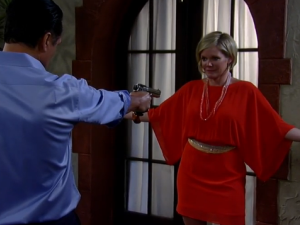 It was a short week that just kept getting better and better despite a few diversions into the ridiculousness. Could they maybe play “General Hospital” on Saturday so we wouldn’t have to wait through the weekend?

Faux Luke-warm.
Each week, more people wonder what’s up with Luke. As warm as we think they are getting, it wasn’t long before the hint of truth is cold again. What is wrong with Anna and the PCPD? There should have been news with a photo of Luke’s unidentified hit man for anyone to identify made public. Apparently that’s not going to happen and it’s too bad because Lulu can identify she saw the man. It would be a wasted lead though since she’d probably go to Faux Luke first anyway. For all the threats he continues to throw around it’s not possible he’d be able to hire anymore hit men if word gets out that he killed the last one so maybe people should be a little less afraid of the crazy man who is hooked to the most high maintenance ball and chain in town. It was funny that her biggest worry about him was the fact that he was missing all the time. That’s Luke, what’s not Luke is holding a gun to Ned. Luke’s excuses and whacked out lies for everything are so unbelievable that viewers have to ask themselves, “What is in the drinking water of Port Charles?”

Farewell for now, Lucas Lorenzo Spencer.
Like the real Luke, we suffered through the rantings of Faux Luke prior to his big reveal fake out before he left on his honeymoon with Tracy. Anthony Geary brought sadness and insanity to the episode and although it was so very annoying that we still don’t have confirmation of who is masquerading around as Luke, the episode was brilliant.

Oh, for Heaven’s sake.
Give us a baby-break already. Are the writers kidding us? Sonny slept with the enemy, was about to show us his rage not unlike the rage that burned in him when he learned Claudia Zacchara was responsible for Michael getting shot and lying in a coma, and Ava is pregnant? They already had built us up for the poignant goodbye with Ava’s promise to see Kiki tomorrow. Not. I guess they might see each other soon since Sonny is all about family. Here’s a baby name for the two of them…how about AJ?

Ric, Nik and Liz.
You can’t say the name Liz without there being two other names attached to the conversation. The Liz triangle of the moment continues to include Ric and Nik. With Ric being arrested there will be no way to keep Liz all warm and cozy in his bed so bets are on for how long it takes her to relocate to Wyndemere to warm up Nik’s bed if she doesn’t believe in Ric’s innocence.

Personal vendetta vs. justice.
It is no wonder Anna's superiors don't trust her. She definitely is guided by her own personal feelings about everything. It would have been a more pleasing moment if Julian's going over her head to make a deal with Scott Baldwin didn't result in Ric Lansing being named as a drug lord instead of Faux Luke.

Franco cares.
Someone had to look after Carly with Luke missing and all. Now that Franco and Carly's road trip to see Spinelli that I blogged about last week accomplished what they needed it will take some time to find out how much their discovery that Ava shot Connie will impact their family now that Sonny knows.

Friday follow-up.
For shame! Shame on Julian for lying to Alexis. He almost came clean, and why he didn't is a mystery. Shame on Alexis for not believing Ric. Shame on Morgan for making advances toward Olivia. She didn't seem to consider them which is good for Morgan because this could have been the second in a string of revenge rebound relationships since he came back to Port Charles and lost Kiki. If Olivia falls into anyone's arms, maybe it could be Duke's once Anna sees the light and kicks him to the curb for ruining her career over and over and over again. Shame on Ava for being Ava. Last but not least, shame on the writers for leaving us hanging over the weekend after being taunted by Faux Luke.

Julian's lie.
It was one of the most disappointing moments of the week when Julian gave up Ric Lansing as the head of the Jerome crime family. Was it worth it? Take Soaps.com's General Hospital Poll to tell us.

Off-screen miss – Alice playing with Rocco, fans would have loved to see that.

Best dressed – Elizabeth for her date with Ric.

Creepiest quote – Sonny to Ava, "I wouldn't bed you with AJ Quartermaine's corpse after what you did."

Best reveal – Olivia dropping the bombshell to Carly that Sonny slept with Ava.

Best hair – Nik had the best hair this week.

Weird habit sighting - Sonny crunching on ice cubes and limes while threatening Ava with a gun.

Sexcapades part two – Kudos to all the loving that continued into this week.

Franco, "I'm an artist." Ric, "Apparently so was Manson."

Faux Luke to Olivia, "Why don't we go somewhere quiet. You can undress your feelings."

Faux Luke planning honeymoon, "Just get me and the ball and chain out of town tonight….use a credit card, an ELQ credit card of course."

Luke to Julian, "Never underestimate the power of telling people they're right."