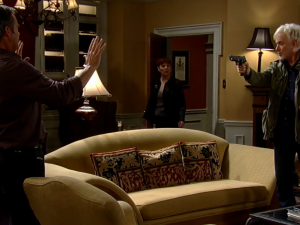 It was a pretty intense week that began with eerie opening music including a hint of Darth Vader-like breathing to complement more than one story filled with an air of mystery.

Me.
The mystery that lost traction fast after Julian Jerome’s dinner party was Silas’ mystery ‘me’ who sent him flowers. It will be disappointing if his wife always signed things to him as ‘me’ and he’s not making the connection now.

Plus one.
Felix accepting a date with Lucas to go to Julian’s party started out romantic until his date took a bullet. Hopefully this turns out well because as far as Felix goes, he’s a much likable character where Lucas is concerned as is Julian when he is with Alexis. This was the best dinner party ever, until dessert was about to be served. It’s hard to remember what Julian did with his gun but gun or no gun; shouldn’t he at least have guards to protect him and his family? Sonny does.

Faux Luke.
Ranking higher on the creep-o-meter this week was Faux Luke. It became clearer that there was no possible way that this was Luke Spencer. Being a mob boss is too much like work and in recent years, work is not Luke’s forte. While fans may be eager to find out if the real Luke is alive, safe and sound somewhere, Anthony Geary (Luke) has been having his fun playing whoever has stolen Luke’s identity. He certainly is a force to be reckoned with and all should heed Julian’s words of advice to be very, very careful.

Anna.
Whoa, now we know where Robin gets all her self-righteousness. Anna came off quite smug while viewers enjoyed the irony that her ultimate target, Julian Jerome, isn’t the kingpin she thought he was. Adding insult to injury was the fact that her colleagues don’t trust her.

Six months.
Nathan was more challenging and relevant to Maxie than Levi could ever hope to be and made her think about Georgie and maybe consider the custody hearing as an option to get her life back on track. Unfortunately the story is too disjointed with the long periods of absence from the show. Romance does not get a fair share of airtime. We get clusters of it here and there followed by the usual love drought.

Best home decor – The Q's couch cushions are so organized and symmetrical.

Most disappointing P.I. – Sam can't run in heels or jump a fence in an evening dress.

Most disappointing mom – Tracy, it was even low for Tracy to reject Ned like that.

Best tie – Duke Lavery, of course there was no competition since it's not possible that anyone else in Port Charles was wearing a tie that day, except perhaps Lucas who dresses impeccably.

Early SORAS sighting – Danny was walking and will probably be in school with Emma, Cam and Spence soon.

TJ and his mom.
Well, we were waiting for it and we got the answer we expected. Jordan announced she was a DEA agent. That's happy news since now we can watch her take down organized crime or evil Faux Luke. It already has come at too high a cost now that TJ is disgusted with her. He'll feel differently when he knows the truth but until then he has Molly to fall back on for support.

Hanging on by a thread…or not.
While Duke and Anna were brought together following the Jerome takedown, Scott and Sonny finished out the week wondering if they were attached or unattached. Lucy's expectations were a bit unreasonable to think she could walk away from what she did to Kevin. There was no talking things out after Lucy reciprocated Scott's kiss on stage at the Nurses' Ball, in her underwear no less. It was a little bit sad that Kevin wanted a divorce, just a little bit if you are a Scott and Lucy fan.

AJ comes through.
He really did. That tape or accidental tape of his conversation with Ava was sorely needed but what Carly does with it is what will matter the most. Instead of the same-old, same-old, drama, they should take advantage of Franco's background and utilize his skills to create an entertaining performance art piece at the Jerome Gallery.

Friday follow-up.
Anna was as impressed as viewers were that Scott took a break from his love life to show up to work and play D.A. for the day. It was too bad he's more interested in taking down Sonny than finding out that the man he left Miscavige with wasn't Luke Spencer. At least Baldwin owed Julian and thankfully he made it to the hospital time, or did he? In Sonny's camp, the truth about Ava was finally coming to light. Of course Carly wasn't going to get it out fast enough before the show ended but the week as a whole closed out as one of the best weeks not to miss "General Hospital."

Cross-country.
Ellie and Spinelli – a nice reprieve.
Carly and Franco brought some levity to the show on their road trip to visit Damian Spinelli and Ellie Trout. I am tired of hearing how Jason would not approve of Carly's relationship with Franco. I actually think Jason would like them as a couple. Franco is all about Carly. Who wouldn't want that for their friend? Given that Robin is working on bringing Jason back to his friends and family, how do you think he would feel? Take Soaps.com's General Hospital Poll: Would Jason approve of Franco and Carly to tell us.

Lucas to Felix, "I would ask Magic Milo, but he bats for the other team."

Felix to Lucas, "Hmmm, I do love drama."

Silas to party guests, "They're flowers, just flowers, it's not like it's a severed horse head…no offense."