Best performance – Emma and Cam's tango followed by the final coup of the night, Spencer introducing Player. The band worked magic on the crowd as many couldn't keep their eyes off of others while Baby Come Back played. Ronn Moss ("B&B's" ex-Ridge) saved the night.

Most haunting performance – The Haunted Starlets, which may haunt fans of the Nurses' Ball forever.

Most questionable performance of the ball – The murder of Mr. Marbles by Epiphany.

The sponsor – Still Yoplait in case any viewers didn't notice last week. They made a point to drive it home this week; although it could have been some underwear company.

Fashionably late – Britt, who also had the best makeup of the evening. Her smoky eyes were perfect, even if Kiki had the longest lashes.

Worst hairdo – Levi, and worst footwear for that matter.

Biggest save – Felix filling in for Lucy.

ELQoup.
It was the greatest move in recent ELQ history and trumped Faux Luke's attempt to take over the company by marrying Tracy at the ball. Even Tracy appreciated the irony that Edward would have loved it. Michael did the surprisingly Tracy move of talking to Edward's portrait after taking over the company. Here's to hoping he does right by Edward and AJ. It will be most entertaining to see what Luke will do next.

Mile high club.
Half of Carly's life had been spent married to men with private jets. Really, she'd never done it on a plane? Maybe mile high is more relevant if you're trying to do it commercial. Meanwhile back on the ground it was as if the writers remembered everyone had a love life or needed one. It was a downright sexcapade everywhere…except in Molly's room. Shawn could have gotten lucky if he wanted Jordan, Sonny wasn't going to get lucky at all but Alexis made sure she'd get lucky by having Julian sneak in through the window. Apparently what he lacks as a mobster he more than makes up for in the relationship department these days.

Were harsher words ever spoken?
Kevin told Lucy to go to hell and it seemed harsh. Scott's a grown man throwing himself at her like he's done with her and others in the past. She tried to make it work and although ending up on stage in her underwear was true to form for Lucy at the Nurses' Ball, one couldn't help but feel sorry for her. Was Kevin's response out of line? Take Soaps.com's General Hospital Poll to tell us what you think.

Nathan to Maxie, "Looking forward to seeing your moves Maxie."

Luke to Julian, "I bit the bitter bullet and married the b****."

Felix, "The Bensonhurst medium will not be appearing due to unforeseen circumstances." 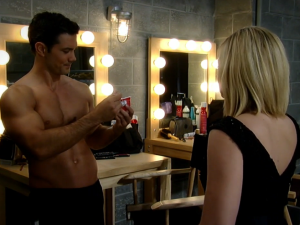 This week a Nurses’ Ball that was lacking, a successful ELQ coup of the next generation, and rekindled loves and friendships tried to keep our attention. It’s too bad some of it didn’t work.

Final thoughts on the 2014 Nurses’ Ball.
This year’s ball was short and not as sweet as in years past. Even last year’s seemed well planned and choreographed when compared to the 2014 event that should have been more about celebrating its 20th year. It was dark, if not boorish, with the only redeemable qualities being the fashion and the advancement of a few key storylines. Everything else was forced and sometimes it just looked like they phoned it in. It is hard to dismiss it as lackluster since on reflection it seemed as though the event as a whole this year was supposed to fall flat anyway, especially after being opened by Dr. Obrecht and nearly finishing when Lucy was caught kissing Scott in her underwear. Felix’s best attempts to revive it didn’t work and appeared to be part of the joke. The biggest disappointment was that the ball was always about HIV/AIDS. That didn’t seem prevalent this year as there was more hawking of Greek yogurt than anything else.

Even fans of the show complained on social media, Debbie Neubauer was disgusted enough to say that the writers “should be ashamed of what they have done to a once beloved ‘GH’ tradition. I hope there is not a NB next year unless Robin Drake is there.” Others took issue with the Blackie Parrish bait and switch and thought more about the yogurt that John Stamos advertises. Most of the favorable comments were about the fashion or Dr. Obrecht’s opening number.

Wallflowers.
Britt didn’t have a date but she was quite the cheerleader for Brad and rocked her butt off while he sang. He was trying real hard to win his man back but it’s possible the triangle might be back on but in a different configuration of what it was before since Felix and Lucas seem to have hit it off. Lulu and Maxie were back on as friends after Levi became very agreeable and escorted Maxie to the ball.

Choose me.
It was timely that the two minute warning was called before the curtain was raised while a few couples were in the middle of deciding who would get another chance. Brad, Sonny, Rick, Scott, Britt, and Spencer made their case. Unfortunately Scott’s feeble attempt to steal Lucy’s heart took place on stage and it was hard to figure who felt worst, Lucy, Scott or Kevin. Okay, we know it wasn’t Scott because he was under the impression that he got the girl. Outside of Lulu and Maxie’s successful reunion, the only noteworthy reconciliation was Dr. Obrecht’s with her children after her beautiful rendition of You Were Always On My Mind. We had to ask ourselves what was more beautiful, her dress, her song, or the feeling of compassion possibly coursing through her children’s veins…kind of like when the Grinch’s heart grew three sizes in one day. Oh, it was almost group hug time especially when Britt suggested to Nathan that he take them all home.

The after-party.
We all knew it wasn’t going to end well after Lucy’s big onstage reveal. The brawl between Bobbie and Lucy at the Metro Court coupled with the brawl at the floating rib between Mac and Kevin entertained. It’s a feeling of coming full circle to see the veterans carrying a storyline this long to keep the history of the show alive.