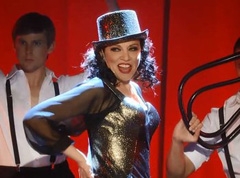 This year’s Nurses’ Ball contained many spectacular performances from the residents of Port Charles. One of the most notable was the literally scene-stealing opening number “Willkommen” by Kathleen Gati (Dr. Obrecht). Now “General Hospital” has made all of the songs available on iTunes for $.99 each.

These releases are the full performances and include two different versions of the closing number “You’re Not Alone.” Sonya Eddy’s (Epiphany Johnson) version of the song and the duet between Teresa Castillo and Jason Thompson (Sabrina Santiago and Patrick Drake) are available for purchase.

As Soaps.com reported earlier, a special appearance was made by Ronn Moss and Player on General Hospital. You can watch a video of their performance right here, and learn more about the band by visiting Player the band.