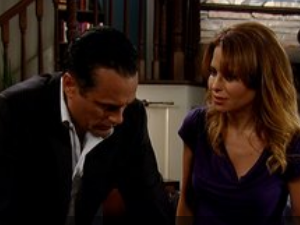 Things got messier this week in Port Charles as a few relationships were on the line and an audience gathered for the anticipated doom that usually surrounds the Nurses’ Ball.

Cellular.
Only the phone knows but it wasn’t talking. Carly and Franco turned their little phone fiasco into an episode of “Murder She Wrote” as they tried to make sense of the choppy messages coming from it. What better way for them to find out what was going on than to go on the lam together.

Brotherly love.
If history is correct, Julian never was his own man. Someone else was always giving the orders or getting in the way. The best he could do was out Ava to Shawn for Olivia’s shooting. The story has dragged on so long that it wouldn’t be surprising if any viewers remember if Julian even knows that Ava shot Connie as well. If he did, he’d probably love a ringside seat for when he tells Sonny that.

The takedown.
Ned vs. Faux Luke. The game is on and now Michael wanted in on the action. Kiki can’t protect him any longer. This is no longer a joke so naturally it was time to wait for Luke to do something at the ball. Who knew it would be a shotgun wedding? His performance was incredible in spite of not being able to think anything but that he was the lowest of the low while he took his vows. The ball’s back in Ned and Kiki’s court for next week.

Olivia and Sonny.
Now there’s the passionate scenes, Lisa LoCicero brought it this week when it dawned on her that Sonny was unfaithful. She had finally become a member of the welcome to the real world club when she learned of Sonny’s infidelities. We have to wonder if Tracy will be close behind.

Best dressed – There were too many choices considering it was the Nurses’ Ball but Felicia, Olivia, Alexis, Molly, Anna, and Elizabeth stood out. Lucy wore some stunning pieces, but with all that said, Olivia’s dress was probably my favorite.

Sweetest moment – Julian not wanting to kill Ava, after all, he liked her much better than his sister Olivia. Okay, Carlos taking a murder wrap for the love of his life was pretty sweet too.

Most ironic moment – Duke wanting to celebrate Anna’s latest victory…catching AJ’s killer, or was it Anna apologizing for thinking Duke was lying for Sonny.

Ideas.
Nathan called Maxie on her parroting of Levi's ideas. Amen to that. How on earth did he worm his way into our hearts. That detective has it going on and Maxie has taken notice. He's the one for her and let's hope it doesn't take too long for this relationship to take off. There's only so much more of Levi that we can take. It was tiring to watch him do things for Maxie's "own good."

Liesl, Mr. Marbles, and Luke.
Oh the many ways that the Nurses' Ball could go all wrong. Liesl actually nailed it with her opening number. That woman rocks, but it was a bit bizarre as if Mel Brooks had taken over the show. As entertaining as the red carpet and the ball itself was, those watching from afar impacted viewers too. Britt, Brad, Nikolas, Spencer and Maxie couldn't help themselves and a few of them decided that they couldn't keep themselves away.

Ms. Lucy Lovelorn.
It's hard to tell if Lucy's being eaten alive by guilt over her affair with Scott or for the fact that he has forsaken her. Should she come clean to Kevin about it? Take Soaps.com's General Hospital Poll to tell us what you think.

Olivia to Sonny, "It just happened…like what, an accident? Like you took a turn too fast and fell on top of her?"

Bobbie to Luke, "Who are you and what have you done with my brother?"

Felix to Dr. Obrecht, "You belong in jail, on an island, in shark infested waters."

Ric to Nikolas, "Correct me if I'm wrong, wasn't this very house recently used as a hideout for an escaped mental patient and a whole flock of mad scientists?"

Emma to Mac, "Uncle Mac, put away the scary puppet."

It's Emmy season. Vote in the Eighth Annual Soaps.com Sudzies to tell us who your favorites are.