Watch this week's General Hospital Weekly Spoiler Video to see how many will suffer from one of the many big reveals. Read Soaps.com's Revenge Recap: Revolution to catch the wave excitement in learning who murdered who and who got abducted.

“The only man I’ve ever loved was you.” – Tracy to Edward

Another throwback to 1980 “General Hospital” dips into the strange workings of the Quartermaine family in Port Charles.

Of late, Tracy Quartermaine has been the victim of a few raised eyebrows regarding her engagement to Luke Spencer and it’s no surprise that friends and family are asking questions. A few have went so far as to warn Tracy that something is off about him but the truth is, she has been warned time and time again about guys as far back into her past as any can remember. One such warning came from Edward Quartermaine regarding Mitch Williams despite Tracy’s liking of the ambitious man with political aspirations who nearly divorced her in 1980.

Edward believed Mitch was more interested in Tracy’s money. He was more trouble than that though, when throughout their marriage he carried on in an affair with Susan Moore. Susan waited on baited breath for the day that Mitch would ask Tracy for a divorce. Mitch’s timing was off when Tracy had an argument with Edward that turned into an attempt on his life. Her lack of compassion resulted in her watching her father beg for his heart medication while she waved his will in front of his face. Edward was more resilient than Tracy expected and surprisingly bounced back. Needless to say, Edward’s last will and testament was not handled in the manner she would have liked after he felt betrayed by her inactions to save him.

Following the event Susan was surprised that Mitch asked for a divorce, however after some time, Tracy was duped by the man again when he decided to stay married to her. Can you recall why Mitch stayed married to Tracy? Vote in Soaps.com’s Throwback Thursday Poll to tell us what you think kept the two together. 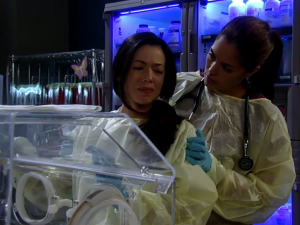