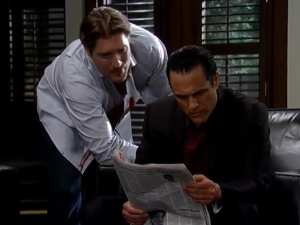 A surge of momentum from last week carried the weight of some crucial storylines this week bringing viewers a few shocking developments that made up for where we were left hanging.

Alone at last?
Sonny’s being forced to face his demons brought some of the best performances this week from Maurice Benard, Lisa LoCicero and Sean Kanan. Admittedly I’ve found the ghost visits tiring of late, but Kanan’s return as haunting-AJ was great. LoCicero also rocked Olivia’s confrontation with Sonny. Now can the story make haste to the big reveal that Ava’s responsible for Sonny and AJ’s troubles?

What’s happening?
Duke re-upped, pledging his allegiance to Sonny in a random visit to him. It seemed confusing and out of place, as did the one day that Carly and Franco reentered the screen. Moments like these have us questioning if characters are serving a real purpose. Carly’s appearances haven’t been integrated well lately and are forced when just added as an afterthought to get both her and Franco out in front again. Franco needs to be vested in a story and it’s disappointing that he’s thrown into the mob war and Sonny/Carly drama. If he was associated with the gallery or local art scene in some way that pitted him against Sonny, that might fly, but artist in down-time doesn’t cut it anymore. Maybe he just needs a job.

The dumbing down of Franco.
Speaking of Franco, he started out as annoying when he made it to our TVs. Here is someone who was the mastermind of working his agenda against Jason and it is beyond the stretch of his imagination to understand where Carly is coming from in regard to Ava’s involvement with AJ’s murder. If anyone could figure out this puzzle one would think it would be Franco after all of his experience creating cryptic performance art. I could have screamed for joy when I saw his graffiti all over his room at the Metro Court though. Maybe there’s hope for him yet.

Patrina.
Another couple sneaking back onto screen was Patrick and Sabrina. It was perfect timing, since Carlos was back. We can miss Robin all we want, but for many, Patrina makes us happy. Personally I find it’s hard not to be a fan of both sometimes, especially when the pseudo couple was now celebrating the news that they were having a boy.

The Britch.
Britt was found sulking throughout the hospital and beyond. Her visit to the Falconeri’s to deliver Rocco’s prescription presented a dilemma when Lulu explained Ben was now Rocco. Britt looked as annoyed as she did when Obrecht wanted to call him Cesar. Instead of rating names, the woman might do some good to try to figure out what her mother did with the Falconeri embryo.

Nikolas.
Who won’t he bring home with him from the hospital? That man seriously needs to focus on raising Spencer up better and stop meddling in the lives of these forlorn, sick and injured babes. Plus, when he gets a chance he might think better of dismissing Spencer’s accusations that Luke means harm to Uncle Sonny. After Heather Webber had access to the Cassadine stables you’d think that Nikolas would have beefed up the security on Spoon Island. Someone should be reviewing security footage.

Divided we fall.
The Jerome organization took a hit this week. Ava and Julian called each other out for reasons not to trust the other. Ava was fired up nicely over Julian's attempt to incriminate her, but he was more so cautious knowing someone was leaking information. Of course he's probably more bored with her shenanigans than worried so he will have plenty of time to consider Jordan's motives for wanting a piece of his and Luke's drug action. Tsk, tsk, drugs are bad. Their whole operation will probably implode from all the bad karma, that and Ava's distractions of Carlos and Sonny.

Will the real Jordan Ashford please stand up?
Wow, so now we have Jordan's number. She's quite the opportunist. Here we thought she could have randomly been put in the gallery as someone who would stumble on something important to help Shawn and Sonny later for the sake of her son's well-being. Nice twist turning her into a dealer.

We are family.
We found the Quartermaines at their best when Ned surprised Tracy during her time of mourning for her nephew. Well that sounded nicer than what actually happened when she thought of AJ, "What a wasted life." Ned couldn't say much better and admitted not having much use for "Junior," but that he was still family. Oh, and Tracy didn't think Dillon should bother flying out for the funeral. Duke was the only one who seemed to like AJ and was more interested in offering Michael his condolences than Ned who was too busy trying to talk his mommy into signing a pre-nup before marrying Luke. That was less exciting than being left wondering what painting Tracy was about to get from Luke or Faux Luke for her birthday.

Faux Luke.
Faux Luke may have created irreparable harm to himself after his faux pas. How could he not think that visiting Kiki could get him into more trouble? Next week should prove interesting between the fallout from his recent actions of attacking Kiki and threatening Ned to Ava's threats to Carlos.

The Westbourne virus.
The weirdness in that family was spreading. Detective West was as fast on the draw as Dante usually is. We're left wondering when he'll get around to confronting Obrecht after he waits for Sister Britt to get back to him after his vague voicemail message. It's possible that Nathan was more drained by Levi's strange cosmic energies than Levi is drained of Nate's negativity.

Mr. Truth Pillow.
Well, three's not company in Maxi's apartment. One can only imagine she's been punishing herself by giving up her favorite shampoo while dragging Levi to Port Charles with her. Mr. Truth Pillow is either the great annoyance or the great manipulator. He was just too smooth in talking her into trying to evict Nathan. Maybe having a cop around isn't desirable if you're pulling a fast one. Levi has received mixed reviews. Many either love him or hate him. What's your take on Maxi's latest distraction? Take Soaps.com's General Hospital Poll to tell us what you think about the situation.

Ava to Julian, "Tell me what false headlines did you plant today…who are you trying to set up for murder this morning?"

Julian to Jordan as Luke arrived, "There is absolutely nothing nefarious going on in this gallery."

Tracy about Luke, "He's not the man he used to be."

Nate to Maxi, "It's not my fault that you found yourself in the middle of the month."

Ned to Tracy, "Where is your aging gigolo this morning?"

Luke to Kiki, "You don't deserve my donuts!"

Spencer to Luke, "Turn around and face your accuser, Uncle Luke."

Read Soaps.com’s Interview With General Hospital’s Marc Anthony Samuel for an in-depth look at his upcoming films and his thoughts on his role as Felix.