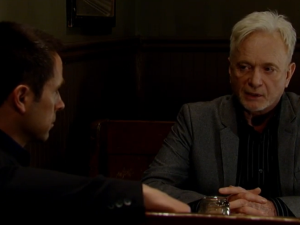 Episodes were solid in Port Charles this week. The music was edgier, speculation ran high in a number of storylines and Maxie returned but was some of the drama over-played?

Maximista!
It was so good to have Maxie back, so great to see Nate smile because of it and so annoying to witness her guru in action and entertaining to see her sporting peace, love, and understanding.

Faux Luke.
Tracy was worried about Luke’s reputation for buying art from a gangster, and figured he had an agenda when he wanted to work for ELQ, but it still felt as if her brain stopped working. More painful to watch was Sonny trying to figure out what was going on. He was already stuck on stupid when it came to Ava. Maybe he saw the light and figured out the trouble with Luke. Their meeting Friday was chilling. The overlay of Spencer sharing his concern about Sonny being in big trouble and not knowing it was touching.

Ric.
Oh, looky at Ric, trying to change his stripes. He better watch himself, giving up his job like that could have consequences…he and Molly will have to live with Alexis. By the way, what was that about not wanting to be overly dramatic, rushing to Elizabeth’s bedside. So don’t be. I’m a very happy viewer that Ric Lansing is back in town, but if we have to watch Nikolas face off with another man again who wants to stake a claim on Elizabeth, well, I just think not. Ric was working the dialogue while laying down the law with Sonny and in all of three seconds he was at the hospital fawning over Elizabeth in the most annoying way. Please, down boy. Don’t make us sick of Ric before he’s had a chance to stay his welcome.

Art.
Alexis was just glowing. Never mind Molly walking in on Julian and Alexis, Ava could have walked into her gallery and found them. Oh wait, they’re not really selling art there anyway. Nothing’s been sold since Heather’s exhibit. Maybe Ava should turn it into a bed and breakfast before Franco’s inspired again and they have to have one of those scandalous openings. The real art was Ava and Silas realizing neither of them had anything to do with murdering anyone. The moment where they both got closure was intimate and real. It was the most genuine Ava had ever been. It wasn’t lost on Morgan who witnessed the exchange, which in turn brought about Ava’s confession that she has a whole life before she met him. It was more like a whole life before he was born, but who’s keeping track? Morgan is too young for all he’s had to deal with since leaving school.

The mystery of Obrecht and Madeline.
Sisters, it makes total sense. Obrecht has a history with Victor, Madeline must have known Victor in some sense from the clinic Nina was previously held at, not to mention they are both a unique kind of crazy whose relationship only raised more questions like who the father or fathers were of Britt and Nathan and why Madeline was disinherited, and if Nina gave birth while in captivity. The prison scenes were sharp and witty with the baiting banter between the two sisters who obviously haven't let bygones be bygones very amusing. However, the piece de resistance was Obrecht playing her ace card, taunting Dante with the fact that he and Lulu had another child.

Move it!
I would love to see the discussion Dante has before he leaves a burning building. Get the heck out of the PCPD already. Lulu was waxing philosophical while Dante took his sweet time. Later, Elizabeth was at home bleeding all over her white couch and he took his sweet time taking Ben from Britt. They need to step it up. For one, that police department is like a black hole for valuable storyline time. Nothing ever happens there and if it does, it happens over and over and over again.

Carly and Franco.
Whoa, we have to wonder what Carly was thinking when Franco went off on a tangent. It was time for him to go back on a job search because he was overthinking the benefits of Sonny shooting AJ. It was plain awkward for a couple moment.

Cliché?
Viewers know that the writers have been there and done that more often than not, especially in the last year. After this crazy week, what did you find the most cliché? Take Soaps.com's General Hospital Poll to tell us.

Obrecht on raising a baby, "My mothering days are over."

Luke to Tracy, "You could suck the joy out of a donut."

Tracy to Luke, "My apologies, the world stopped spinning on its axis for a minute there."

Franco to Carly, "AJ was awfully chatty for a man on his deathbed."

Britt to Nathan, "There are no more surprises left."

Ric to Elizabeth, "Hey you were married to me and survived that, what's a little bullet wound?"

Read Soaps.com’s Grey's Anatomy Recap I'm Winning to learn what idea spurred Bailey on to save a patient.